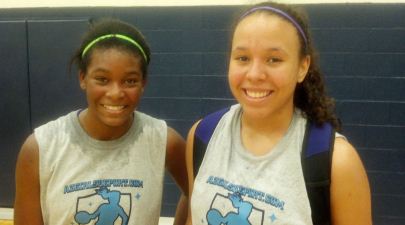 There were 40 girls at Ron Coleman’s Southwest Showcase for senior girls at South Mountain C.C. on Sunday, October 7th.

Many coaches were in attendance to possibly offer many of these girls, including Mesa CC, Chandler-Gilbert CC, South Mountain CC and Western New Mexico University - a division-II program.

After watching 2 games by each girl, these were there the top 20 girls based on how well they performed - concluding with the top prospects from the 2014 class for girls in the state ...

Cecily Wilson  SF  5’9”  Mesquite HS - Cecily is a defensive dynamo. Besides being the best athlete at the event and one of the fastest, she can score on all 3 levels too.  She can hit the 3-point shot, but truly has a better mid-range shot. Her crossover is special - blowing by any defender at will and finishing any lay-up.  Her rebounding is amazing, as she gets rebounds just on sheer athleticism.  She is very long to make many deflections, steals or blocks during the game.  She was the top player at the event and has the look of a nice division-I talent.  Coaches will be lining up to get her signed.

Taylor Blue  PF 5’10” Peoria HS - Taylor is an inside-outside nightmare for her opponents.  She can do the dirty work down low in the paint with some nice turn around jumpers, and some blow-bys.  She truly is special facing the rim.  She can hit shots from 3, but her mid-range game might have been the best at the event.  She hit 5 mid-range shots in 2 games to go along with her 3-point shot.  She also is strong defensively inside to block some shots and grab some boards.  Her IQ is high to find the open girl cutting for a lay-up, or to kick it out to an open teammate.  She will be playing in college in 2 years.

Sophia Anaya  PG  5’9” Mountain Pointe HS - Sophia has a great feel for the game of basketball and a overall high IQ.  She has a great 3-point stroke and outstanding court vision.  She can hit the mid-range or go by you, but normally shoots the 3 or tries to facilitate for her teammates.  She also is very solid on defense, as she had a few steals on the day.  She is a very confident player and a hard worker.  She will find a college in 2 years also.

Casey Wortley  PF  6’1” Ironwood Ridge HS - It’s hard to stand out when you are playing along side 2 star seniors like Sydnie and Nidja, but Casey did just that.  She won the Hustle Award from me, and is also a very good mid-range shooter.  She has solid size for her position and just tries to outwork her opponents.  She has excellent form on her release and it looks like the ball will go in the basket every time.  Her defense is solid and she can grab some rebounds, but her shooting is her thing.  Ms. Hustle will be a solid get in 2 years.

Soccorro Ward  PG  5’6” Sierra Linda HS - Corro, as they call her, has a very good mid-range game and is a solid passer.  She also is very feisty on the defensive end to get some steals.  She also uses a solid shot-fake to get by her defender to lay it in. Moving forward she will have to cut down on the turnovers to not miss opportunities for her team to score.  Overall, she is a very good prospect and will have a great year in HS.