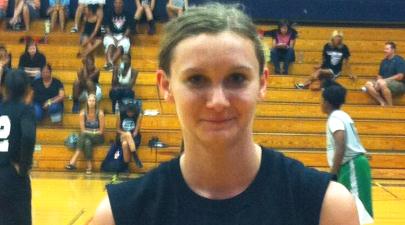 There were 50 2016 girls prospects at Ron Coleman’s Southwest Showcase Discovery Camp at Deer Valley High School on Saturday, September 15th.  Parents learned about recruiting and academics for their young girls.

Here are the top 25 girls from the event based on how well they performed.  I begin with Part I of my recap ...

Alexis Cortez  PF 5’10” 145 Tucson High - Alexis is a very strong, long and highly skilled PF with a great demeanor.  You never know if her team is up by 20 or down by 10.  She is very consistent with her approach to the game.  She first hits you inside with some power moves to the hole and gets lay-ups off the dribble.  She then takes you outside and hits 3-point shots - she hit 4 in only 2 games.  She also is an excellent rebounder and shot blocker.  She cleans up offensive and defensive rebounds at will, and blocks most girls who come near the paint.  In the post, she is very hard to move with her sturdy frame.  She will be a handful for the next 4 years in Tucson.

Sydney Harden  C  5’11” 180  Sahuaro HS - Sydney is a terror inside defensively with her extremely long arms and body. She grabs every rebound near her and alters or blocks the girls on every possession in the paint.  She is a true center as she stays in the middle on every play on offense and defense.  She is not afraid of anything or anyone.  Her offensive game is solid as she has a nice touch around the rim.  She will not attempt shots outside the paint, as she knows her strengths.  She cleans up the glass and makes a living off of lay-ups.  She can improve her handles and conditioning to make her even better.

Ozahria Fisher PG 5’5” 130 Thunderbird HS - Ozahria or "O," as they call her, has sensational handles, a nice 3-point shot and is very strong slashing to the hole.  She is such a confident player and believes she can beat anyone on the court.  She gets in trouble sometimes, as she gets a little loose with the ball and over passes to teammates.  That’s probably the only negative thing you can say though, as she is so special with either the long jumper or blowing by you at will if she wants to.  She might have more upside than the top 2 girls, but has to be more efficient moving forward.  In the future, it is going to be fun to watch this slick handle prospect.

Haley Villegas  PG  5’3”  Boulder Creek HS - Haley is small in stature, but dominant on the court.  She has her eyes up the whole time setting up teammates.  She is a true, pass-first PG.  She tries to get her running-mates their buckets before she ever is concerned about herself.  But, if you leave her open from the outside, it’s in.  She is a very efficient shooter, but that’s not her best best thing on offense, it’s her first step.  You don’t know when it’s coming since you expect her to pass, but when she turns on the jets, she blows by you easily.  She just has a knack of getting in the lane and deciding to score or set players up.  This wizard on the court will go real far if she gets anywhere close to 6 feet.

Addie Buzas  SF  5’10” 145  Chaparral HS - Addie was probably the most efficient player and had the highest IQ at the event.  As Ron Coleman says, “she’s a game changer.”  She handles the ball like a guard and is a strong power player down low in the paint - with many moves in her repertoire.  She also has nice form on her jump-shot out to 3-point range, with her best being the mid-range game.  On offense, she is always moving without the ball, and when she has the ball in her hands, it usually leads to an assist.  She knows where every girl has to be and knows how to get them the ball.  She had around 10 assists in only 2 games.  I wouldn’t be surprised to see her play any position in HS, since she can rebound with the best of them and handles the ball well.  This multi-talented prospect will be a good get in 4 years.

Toni Davis  PG  Desert Vista HS - I have never heard of a power PG, but if there was 1, Toni would be it.  She is very strong with good handles and control of the ball to get by her defender.  She is always in attack mode.  She wants to punish the other players with contact and drive to the hole for a left or right-handed lay-up.  She has very good vision and great defense on the ball.  She gets in trouble sometimes when she gets a little fancy.  She also will have to work on her outside shot, as she isn’t very confident with it now.  It usually doesn’t matter since she can get by her defender, most of the time.  This powerful girl will get the attention of many coaches during games.

Cerena Reeves  CG  5’8” 145  Valley Vista HS - Cerena is another girl who is extremely strong.  She was the best on-the-ball defender at the event.  She had probably close to 6 steals in 2 games.  She has a strong first step power dribble that is devastating.  She gets by her defender and glides to the hole with ease.  To improve on her game from good to great, she will have to extend the range on her outside shot with better form.  She has so many positives to her game, that you never realize she didn’t make any shots outside the paint.  She also has high energy while she’s on the court.  This strong rock is a jump shot away from being special.

Tilasha Okey  SF  5’8” 125  Mountain Pointe HS - Tilasha is a multi-talented player on offense and defense.  She can grab some rebounds and block a few shots down low on defense.  She can handle the ball fairly well, make some nice passes and shoot with the best of them.  She made 3 3-point shots in her second game.  Once she finds her rhythm with her shot, she is very deadly.  She also is deceptively long and fairly athletic.  She always seems to be in the right place on defense and offense, due to her good IQ.  This talented prospect will be solid all 4 years of HS.

Mya Timms  C  Sunnyslope HS - Mya is another great weapon offensively.  She does all her work inside the paint.  She has a variety of post moves that were on display.  She used the drop step, the spin move, had 2 hook shots and the fake and go.  She also is very good with the pick-and-roll, as she shows off her good IQ.  Moving forward, she needs to develop more of an outside game and have better overall defense.  This highly skilled offensive threat will do major work inside for Sunnyslope.

Anessa Glenn  C  5’10” 145  Betty Fairfax HS - She has very advanced post moves at this stage of her career.  She knows how to seal her defender to get great position to make the lay-up.  She was the only girl who did that at the event.  She works for position before she gets the ball, which is a rare skill to have.  She might not be the fastest girl, but she also is always hustling up the court to try and beat her defender in the paint.  It’s very smart basketball and someone obviously taught her the right way to play.  She also is a solid rebounder in her area and a good defender.  This hard worker will be a tough match-up down low every night.