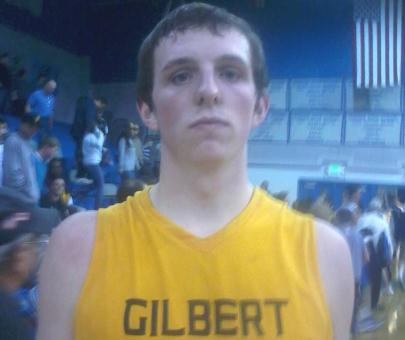 An exciting matchup between the Dobson Mustangs (14-8) and the Gilbert Tigers (16-5) set the stage for a great game on Dobson’s home floor on Friday evening.  With both teams showcasing division-I talent, it was anticipated to be a high scoring affair.

As the game started, 6-foot-5 senior guard Jaron Hopkins (University of Colorado signee) entered the gym - expected to be out with an illness.  The game was back and forth at the start.  As both teams played more of a half-court set to begin the game, maybe it would change with Hopkins checking in at the five-minute mark.  However, the game remained slow-paced and low scoring.

This was the kind of game 6-foot-8 sophomore post Truman Moore likes, as he came out dominant inside, and ended up scoring 7 points in the opening quarter.  This helped give Gilbert a 13-11 lead after one quarter.

Dobson’s offense struggled, maybe due to Hopkins being slow, as he picked up two fouls in the first quarter.

The second period brought a little more offense, as both teams fought each other, but Gilbert held on to a small lead.  All of a sudden, and with one minute remaining until halftime, 5-foot-9 senior guard Carson Glick hit back-to-back three-pointers and helped give Dobson a 29-27 halftime lead.

For Gilbert, Truman Moore scored 8 points and collected 6 rebounds in the first half, while 6-foot-3 senior guard Conner Helvig added 5 points for the Tigers.

Dobson stayed in the game by hitting the three-ball.  They had five long-range shots in the first half.  The second half opened up with a bang, as an Anthony Bryant steal led to a fast-break opportunity for Gilbert's Eric Mosley, who was met at the rim by Kody Justice.  Justice denied Mosley, who was injured on the play, which occurred 15 seconds into the quarter.  Following that play, the action died down, as Gilbert called a timeout with just under 4 minutes left in the quarter, and Dobson leading 36-33.

As the third quarter came to a close, Ryan Richardson got a one-on-one opportunity and took advantage, as he finished with an and-1 just before the buzzer - giving Dobson a 45-42 lead.

The final quarter brought a Jaron Hopkins sighting, as he played the passing lane for a steal, and finished with a monstrous dunk on the break.  He seemed to let out some anger on the dunk, as it was powerful.  Dobson quickly called a timeout after the dunk with 3 minutes left, now up 56-52.

Gilbert answered with a bucket on the next possession, to make it a two point game.  After a couple of defensive stops, the Tigers finally got a bucket with one and a half minutes left to tie the game.  After another stop, Truman Moore came back on the other end with an offensive rebound and put-back to give Gilbert a two point lead.

With just under a minute left, Dobson put the ball in the hands of Kody Justice to make a play.  However, Conner Helvig’s aggressive defense forced a Justice turnover, and Dobson was forced to foul.

The newest player on the Gilbert roster, 5-foot-10 junior guard Andre Mauro, was fouled with his team up two.  He hit both free-throws for the Tigers to make it a two possession game.

A quick bucket at the other end by Hopkins, followed by a quick Dobson timeout, gave them a chance to set up their defense - down two with :26 seconds left.

Conner Helvig was fouled on the following possession and hit both free throws, to make it a 62-58 lead.

Dobson’s following possession was a good one, as 6-foot-9 senior post Brian Nichols finished an and-1 play, off of a Hopkins' pass.  Truman Moore made a mistake going for the block, as he fouled Nichols and fell awkwardly.  Moore had to leave the game with what, hopefully, was a minor injury.

The free throw was missed by Nichols, and 6-foot-6 junior forward Spencer Nicholds controlled the rebound for Gilbert, and was fouled.  He hit both free throws for his only points of the game.

Hopkins came back with a quick layup and Dobson called a timeout with :10 seconds left - down 64-62.

Gilbert was able to get the ball in to Mauro, who hit both free throws and the Tigers held on to win 66-62.

The key for Gilbert was free-throw shooting, as they hit all of their shots from the line down the stretch.  Gilbert was led by Truman Moore who had 19 points, 8 rebounds, and 4 blocks in the win.  Conner Helvig added 12 points and 7 rebounds as well. Anthony Bryant scored 5 points, had 5 steals, 5 rebounds, and 3 assists.

For Dobson, Ryan Richardson was the man.  He had a game-high 20 points, as well as 6 rebounds.  Jaron Hopkins had 11 points, 7 rebounds, and five steals.

A great game had Gilbert coming away with the victory.  Dobson played well as a team, Gilbert just did a great job finishing the game strong.