Gilbert Holds Off Red Mountain In First Of Two Meetings 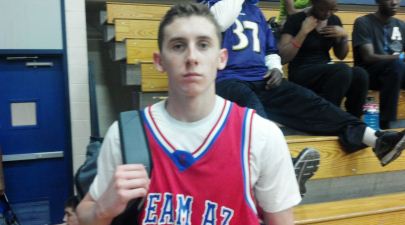 The Gilbert Tigers (9-2) hosted the Red Mountain Mountain Lions (9-3) in what was a great matchup.

Gilbert was without their dominant post presence inside, 6-foot-8 sophomore Truman Moore, which presented them with a big challenge in this game.  In his absence, 6-foot-3 junior forward Eric Mosely started for Gilbert.

The game opened up with a floater from 6-foot-4 senior guard Travis Meeker (Northern Arizona commit) to give Red Mountain a quick lead.  In a very slow, methodical game, Gilbert suffered from the absence of Moore, as their offense, which is based around his post presence, seemed out of sync.  The game was back and forth, with both teams matching each other bucket by bucket.

In an instant, this bland game became exciting, as 5-foot-10 junior point guard Anthony Bryant got a steal and dished a sweet pass to the high-flying 6-foot-4 senior wing Maurice Thomas for a fast-break slam dunk.  Thomas provided 4 quick points off the bench to help Gilbert take an early lead.  Led by their pressure defense, they disrupted Red Mountain’s offense.  However, the Mountain Lions were able to fight and stay in it - making it a tie game after one quarter at 14 points apiece.

The second quarter started with Gilbert taking control.  6-foot-4 senior Tanner Reber provided a couple of offensive rebounds, and four points right away off the bench.  At the five-minute mark, Gilbert had a 22-16 lead.

In an instant, Red Mountain turned the tides.  An and-1 three pointer by senior Derek Rojas, and another and-1 finish inside on the following possession capped a 7-0 Lion run to give them a one-point lead with three minutes left in the half.

Halftime came with a 27-25 Gilbert lead.  Gilbert was led by Maurice Thomas off the bench with seven, and Mosely filling in well for Moore, with 6 points and 6 boards.  Red Mountain was led by Travis Meeker’s 7 points and 3 rebounds and Derek Rojas’ 8 points.  Junior Andy Sessions also provided 6 points on two three-pointers.

As the second half started, it gave off the same slow and methodical style.  A key play was on a Meeker steal to a breakaway dunk, which was blocked from behind by 6-foot-6 junior Spencer Nicholds.  However, Meeker didn’t let that discourage him as he made his impact - scoring 11 points in the third quarter.

A combination of dominance by Meeker and turnovers by Gilbert helped Red Mountain hold a 38-37 lead after three quarters.

A back-and-forth final quarter had this game coming down to the wire.  With just under a minute left, Gilbert was clinging to a 47-45 lead.  Anthony Bryant picked up his fourth foul with 42 seconds left to give Red Mountain a chance to tie.  However, Andy Sessions missed the first free throw on a one-and-one to keep Gilbert’s lead in check.  Anthony Bryant than answered with a clutch drive and finish to extend the lead to four.

Travis Meeker came back with a pull-up jump shot to cut the lead back to two with 15 seconds left.  Red Mountain quickly fouled Gilbert's 6-foot-8 freshman Wyatt Lowell, who made one out of two from the line.  This gave the Lions a chance to tie with a three; however Gilbert head coach Jay Caserio strategically told his team to foul and make them shoot free throws.  A smart move, as Red Mountain junior Colton Plourd missed the first with eight seconds left.  Red Mountain called their final timeout to figure out what to do.  Plourd intentionally missed the second, however it didn’t hit the rim, giving Gilbert possession and securing the 51-47 win.

Travis Meeker led the game in scoring with 20 points, as well as 6 rebounds, and 3 steals.  Other contributors for Red Mountain were Derek Rojas who added 11 points, and Andy Sessions who finished with 6.

For Gilbert, it was a team effort.  Anthony Bryant finished with 8 points, 3 assists, 3 rebounds, and 2 steals.  6-foot-3 senior guard Conner Helvig provided 10 points, and Mosely had 6 points and 7 rebounds.  Off the bench, Maurice Thomas and Wyatt Lowell played well to help fill in for the missing Truman Moore.

Overall, a great win by Gilbert who had a full team effort.  They have a great young coach who has a bright future.

Red Mountain put up a great fight, but didn’t have enough firepower.  They will have trouble if they don’t find another weapon other than Travis Meeker.  Despite their faults, they put up a good fight against a possible final-four team.

Gilbert will be able to get very far this year, as long as they have Truman Moore.  The future also looks bright, as they have a lot of young talent. Especially freshman Wyatt Lowell, who has a lot of potential.

These two teams will meet again in a rematch this Friday (12/21) at Red Mountain HS.