Gilbert Christian Holds On To Win D-II Title In Overtime 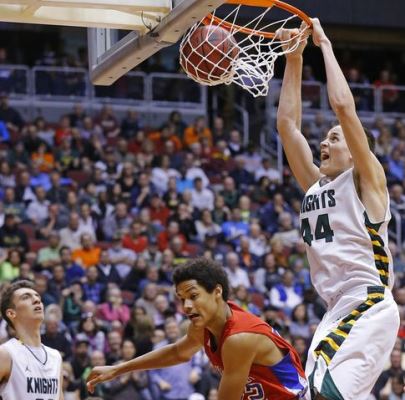 When Gilbert Christian High School moved up to the Division-II Class in the state, anyone that knows basketball in this state knew it would just become a matter of time before this program began to dominate the Division-II ranks, as they had done in the Division-III Class before it.  Well that time has now arrived - again.

This high school season though, it did not seem as if Gilbert Christian would dominate their competition after previous AIA rulings would cause some of their new players to the program to have to sit and wait to be cleared.  For 6-foot-9 junior post Mitch Lightfoot (New Mexico signee), it looked as though he might not be cleared all seson long, but when Lightfoot got cleared to play by the AIA at mid-season, the Gilbert Christian dominance was back in effect.

Shadow Mountain High School was the new dominant program on the block - destined to keep Gilbert Christian from starting their dynasty anytime soon in the Division-II Class.  While Shadow Mountain had won last year's D-II state title, the Matadors would lose Michael Bibby Jr. to a season-ending injury, and also star forward Carlos Johnson to a transfer, which was inspired by his  summer play with the Nike-sponsored Oakland Soldiers.

Gilbert Christian (26-6) would not have to hope for Shadow Mountain to lose in this year's state playoffs.  Instead, they would just defeat them in the D-II state semi-finals - setting up a state championship game on Monday evening with Arcadia High School (22-11).

Arcadia has been led all season long by high-scoring 6-foot-6 senior forward Connor Nichols, and Arcadia would need a huge night from Nichols to overcome the amount of talent that Gilbert Christian possesses.  Nichols would collect three personal fouls in the game's first half, as Gilbert Christian would jump out to a 32-20 first half lead.

In the first half, Arcadia would fail to get out on the shooters and Gilbert Christian would comfortably take the lead.  In the second half, Arcadia head coach Stephen Danford would make some serious adjustments for his team, and Arcadia would get it rolling in a hurry.

The third period would begin with a quick 4-0 run by Arcadia, but Nichols would get his fourth foul in the period - forcing him to the bench.  Arcadia would band together as a team and keep the party going.  A three-pointer from the wing by 6-foot senior guard Jesus Bojorquez, and then a steal and a layup by Bojorquez would make the Gilbert Christian lead just 7 points - 39-32.  After a three-pointer from 6-foot-3 sophomore forward Matt Burton, Arcadia would only trail by 4.

The 15 to 8 run in the third period would give Arcadia hopes of winning a state title, especially with Nichols returning in the fourth period.  After another transition layup from Bojorquez, and Gilbert Christian consistently turning the basketball over and missing shots inside the paint, Arcadia had all of the game's momentum.

Arcadia lacked much size as a team, so when Mitch Lightfoot got it going, it was difficult to stop.  A steal and a monster two-handed dunk by Lightfoot, then another dunk in traffic by Lightfoot, and Gilbert Christian would take back the game's momentum, 45-39, with 3 minutes left to play.

A strong driving layup from Nichols would make the score 45-43 in Gilbert Christian's favor with 2 minutes left to play.  Then, with just seconds remainning on the clock, Nichols would convert a three-pointer to tie the game at 50 all.  Gilbert Christian would turn the basketball over, and Nichols would get one final look at a game-winning basket at the buzzer, but would miss the shot as the buzzer sounded - overtime.

In overtime, Gilbert Christian's 6-foot-4 junior guard Cameron Satterwhite (University of Colorado commit) would start the overtime period with a backdoor cut and a two-handed dunk over a defender.  After two free-throws from Lightfoot, Gilbert Christian would jump out to a 4-point lead.

With just seconds left to play, a hard-nosed Arcadia team would get one final look at tieing the game again and sending it into a second overtime, but Nichols would misfire on a long-range three-pointer as the buzzer would sound - giving Gilbert Christian another state title.

Mitch Lightfoot would lead the way for Gilbert Christian with 15 points, while Nichols would finish with a game-high 20 points in the loss.

Unfortunately for the state of Arizona, Gilbert Christian is absolutely loaded for the future and also very young -returning each of their top prospects next season.  Let the dynasty continue, not begin.