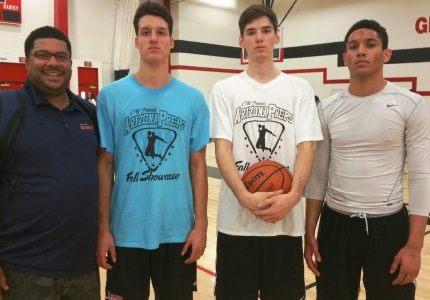 The 17th annual Arizona Preps Fall Showcase was held Saturday, October 24th at Glendale Community College under the direction of Anthony Ray, director of the Arizona Preps website.  Here is a report on the event.

Cheney was impressive in this event with his all-around offensive performance.  He’s a three man who runs the floor well and does a nice job finishing in transition.  He’s a capable ball handler and passer who pulls up well in the half court. He is a solid driver and an ok shooter with 3 range.  He is also an ok rebounder.  Cheney is committed to Texas Rio Grande Valley.

Gorsuch is a competitive combo guard with a nice motor. He’s a confident ball handler and passer who pushes the break consistently. He finishes in transition nicely and can also pull up in the half court. He also shoots it ok with 3 range. He’s a solid Division-II prospect.

Holloway is another promising young prospect from this event. He’s an athletic point guard who handles it well. He’s effective making plays in transition and does see the floor well. He also shows the ability to pull up in the half court. Holloway is a possible low major prospect.

Kelly is a wing man who can run and has some skills. He’s a decent ball handler and he moves ok without the ball. His best asset is his ability to shoot the ball. He is also a capable rebounder. Kelly is a possible low major prospect.

Mason is a three man with very nice lift who can get to the basket and finish strong. He can handle the ball and passes it well and does a solid job making plays in transition. He also shoots it well with 3 range. Mason projects to be a low major prospect.

Ondigo is a long and fairly athletic five man. He’s a decent postup player but needs to finish better. He is an ok rebounder who can get to the ball outside his box due to his length. The big issue with Ondigo is he needs to learn to play hard all the time. He is likely a mid-minus to mid major prospect.

Rogers is a fairly athletic wing/guard who gets things done. He handles and passes the ball solidly and is effective finishing in transition. He gets to the basket on the drive and is a capable rebounder.  Rogers is on the high Division II/low Division I fence.

Rumel is a five man with solid skills. He shoots it fairly well and can stretch the defense. He’s a decent ball handler who has an ok one-bounce drive. He needs to develop his body physically to prepare for the next level. Rumel has committed to Portland State.

Salgado is a wing man who is a decent athlete and can run the floor. He’s a confident ball handler who can make plays in transition (including the ability to pull up). He shoots the ball fairly well with 3-point range and is a capable rebounder. Salgado is on the high Division-II/low Division-I fence.

Likely the top prospect in the event, Shadd showed a nice all-around game. He’s a fairly athletic five man with a competent post up game. He can dribble operate on the block and has a decent jump hook. He is a solid rebounder who consistently pursues the ball on the glass and can get to it outside his box.  He also shows some ability to block a shot.  Shadd is a mid minus at this point worth higher consideration.

Whitaker is an athletic combo forward with long arms. He’s a confident ball handler whose best asset is his ability to drive the ball to the basket. He has a nice hesitation move and can pull up in the half court. He must prove himself as a perimeter shooter and needs to develop some bulk/strength. Whitaker projects to be a high Division-II prospect.

Williams is an intriguing young prospect. He’s an athletic one man who is a good ball handler and passer. He pushes the break consistently and can make plays in transition. He also can break down defenders and get to the basket on the drive.  Williams is a division-I prospect.

Williams is a fairly athletic one man with skills. He’s a good ball handler and passer who is a capable playmaker in transition. He sees the floor and makes pretty good decisions. He shoots it fairly well with 3-point range and is an ok driver. Williams is a solid Division-II prospect who is operating below the radar at this point.

Others To Consider: (*indicates highest consideration for this category)

Athletic, has burst of speed, handles it well, has a nice hesitation move.

Fairly athletic, can handle, pulls up half court, ok driver/penetrator, has hesitation move.