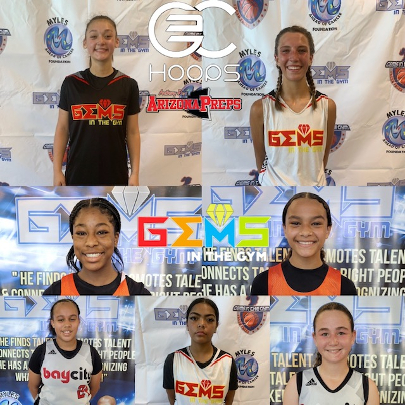 Williams has an award winning formula by going back to the roots and discovering talent in their middle school years, which feeds up into his Fresh Faces Showcase, which he hosts annually (16th Annual this year). His Fresh Faces Showcase assembles the top freshmen talent from the West Coast which has a plethora of Division-I prospects. Here are some of the top prospects I was able to observe today (including some of the top middle schoolers):

Haywood is an elite high major prospect that is a potent scorer and facilitator. She creates at will and looks to get her teammates involved! Besides having potent offensive ability she defends well! Remember the name as I project her to have a bright future playing at a high major school and into the pros.

Her game really grew on me as she was one of the top prospects of the 2026 class hands down. Her most impressive attribute was her poise and maturity. Haywood is a tremendous competitor and possesses natural leadership ability as she makes her teammates better and is not afraid to carry her team on her back by executing what she needs to do to help keep her team in the game.

Woliczko has good size and length. She uses that as an advantage to open up low post scoring opportunities. She rebounds well and has impressive footwork. Another one of the top prospects of the event.

Her game grew on me as her skill set jumped past the competition. Woliczko is a fundamentally sound wing with good quickness, a long frame, and amazing footwork. She is still young at the game according to her Coach Will Watkins (Bay City) as she has made the transition from softball to basketball.

Currently she has a few offers from USD, UC-Irvine, Southern Utah, Pacific and BYU. I feel she would be a solid mid major caliber prospect right now however being only a Freshman she has a high ceiling to develop into a High Major prospect.

A physical guard prospect who is tough as nails, I loved the way she got after it defensively! She is a downhill scorer however displayed good range. Puloka is the real deal as she is the most physically strong prospect I saw at the event.

I anticipate her recruiting to pick up as she has a great platform to build on. College coaches looking for a gritty defensive minded prospect who can get downhill and bully weaker guads to get scoring opportunities, Puloka is a gem find. She is a solid sleeper prospect with tremendous upside.

Moore is a solid forward prospect with good size and finishing ability. She mad dogs smaller opponents to create scoring opportunities at the rim. Moore cleans the glass well and has a bright future ahead of her.

A physical facilitator with similar attributes to CP3. A three level scorer who can flat out ball out.  Defensively she is an elite defender who has great anticipation and IQ to cause turnovers for opponents. One of my favorite prospects of the day as I project her to be a highly sought after high major prospect.

Rogers is an elite high major prospect who can flat out go on both ends. She plays fearlessly and is willing to guard the opposing team's best player. Offensively she imposes her will on opponents by getting down hill and utilizing her athleticism to finish at the rim. A high major prospect with offers from Oregon State and Cal. College coaches, this young lady can straight up GO!

Chatman impressed with her elite skill set on both sides of the ball. A crafty combo guard she broke down defenders to facilitate or finish at the rim. She has a great IQ and motor with tremendous upside and will be anice d1 prospect over time.

Giometti is a potent guard who competes at a high level. She is a confident prospect who is an impact player on both ends of the floor. Offensively she is a bucket and is a crafty three level scorer. She will be a mid major plus prospect as she has tremendous upside. One of the more impressive performances of the day.

Brown is a unique prospect as she has the size and talent to play all five positions.  She has great guard skills and utilizes her size and strength to get down hill.  Brown cleans the glass well and I project her to be a solid mid major prospect in the future.