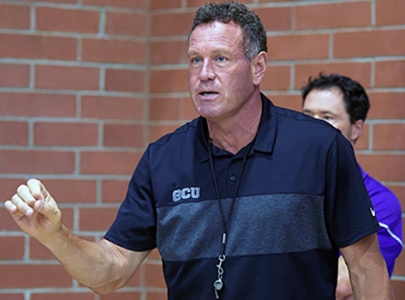 On Tuesday evening, this year's Grand Canyon University (GCU) Elite Camp took place on the campus of Grand Canyon University with many of the state's top prospects in attendance and participation.  Organized and coached by the GCU men's basketball staff, many of the state's top young prospects had an opportunity to impress head coach Dan Majerle and his staff, while competing hard with one another.

The night was filled with strong performances from many of the state's top prospects from Arizona's loaded 2020 class.  Top-rated 2019 prospect Javon Blacksher was in attendance and already possesses an offer from the GCU staff.  Blacksher's father has already indicated that he likes the GCU program for his son, so it will be very interesting to see how it unfolds.

The state's 2020 class was well represented in this year's camp as Highley's 6-foot-11 sophomore forward Shon Robinson, Corona Del Sol's 6-foot-5 sophomore guard Dalen Terry, AZ Compass Prep's 6-foot-2 sophomore guard Jalin Anderson, Shadow Mountain's 6-foot-4 sophomore guard Shemar Morrow and Mountain Pointe's 6-foot-7 sophomore forward DeAndre Henry each were among the elite performers in this year's camp.  Robinson looked very versatile on the evening and showcased his superior size and skillset.  Terry may have been the best performer in the camp, as he looked much taller and longer than before he began the springevaluation period.  Terry looks primed to become a serious recruiting target for the future.  Jalin Anderson was his normal extremely talented self, and played at a high level.  Shamar Morrow is a big-time talent and this was the first time I have seen him play since the high school season.  Morrow played for an out-of-state club program this spring on the shoe circuit.  Morrow's play was superb again on the evening.  DeAndre Henry continues to make noise with his play.  Henry seemed to dunk everything in competition and finished very strong around the basket, while playing tough on the glass and competing hard.  Henry was one of the only true post players in the camp.

Millennium High School's promising 6-foot-8 freshman DaRon Holmes is a priority for the GCU staff already, and Holmes looked very good on the evening, while still being very young and with a very bright future ahead of him.  Cesar Chavez High School's talented freshman guard Ty Ty Washington played very well on the evening, and proved why he is a serious recruiting target by the GCU staff in the 2021 class.

Head coach Dan Majerle even had an opportunity to observe his own son in competition, as 6-foot-4 2021 wing Max Majerle participate in the event and showed why he is considered as a rising young talent among Arizona top young prospects.

Overall, the camp gave the GCU staff a close-up look at some of the state's top young talent, and proved why the state of Arizona is considered the most talented it has ever been.  The GCU coaching staff did an excellent job with this year's Elite Camp, and took another step at showing the state's basketball community just how serious they are about recruiting the state's best prospects.