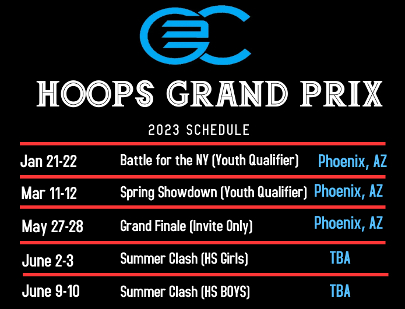 The GC3 Hoops Grand Prix Series is a series of basketball events to provide a platform for student-athletes to be discovered and recruited. The series has (4) high school events - (2) in the Fall and (2) in the Summer (open to high school teams). The events will be attended by some of the top regional basketball scouting services, media and college coaches. The Grand Prix Series aims to bring media coverage (that matters) to assist the recognition, promotion, marketing and advertising of student-athletes. Student-athletes participating in the series will be playing in front of the right people to have the best opportunity to seek playing opportunities at the next level.

The Arizona Preps Summer Clash will be in its 2nd year for girls and will expand to a boys field the following summer. The Summer Clash is becoming the top girls high school event to begin the summer, as it has a strong field of teams from the Arizona Interscholastic Association (AIA) and the Canyon Athletic Association (CAA). With such a strong field, it attracts some of the top scouts and college coaches to scout and evaluate the talent.

The Youth Grand Prix Series is a five tournament series (Fall Ball Classic, Christmas Clash, Battle for the New Year, Spring Showdown & Grand Finale), and is open to 11u, 12u, 13u, 14u boys club teams and 12u and 14u girls teams. Each team who participates in a qualifying event will earn (1) point for participating, (2) points for a semi-final finish, (3) points for a runner-up and (4) points for winning a championship in their respective division. The top qualifying teams will be invited to the Grand Finale and seeded into a tournament bracket per their power points.

The Youth Grand Prix Series is the only series of its kind, as teams battle it out for an invitation to a high stakes Grand Finale Tournament. Teams will have the opportunity to earn bragging rights, as top teams will be etched into the GC3 Grand Prix Series Power Points Team Rankings, and top individuals will be ranked by class. Spots are limited so do not miss out on the Grand Prix, as teams look to race to the finish line.

Readers may ask why the GC3 Grand Prix Series? The Grand Prix Series is powered by the Arizona Magic Youth Outreach Foundation which is a 501(c3) non-profit organization. Our events will be reasonably priced, have free parking, and affordable gate fees for spectators. The series will be attended by some of the top regional basketball scouting services, scouts, media and college coaches. Top Scouts who attended past events include Anthony Ray, Dinos Trigonis, Jerry Mullen, Chad Groth, Gregg Rosenberg, Justin Young and numerous college coaches.

Top performers evaluations are put on our scouting reports sent to subscribing college coaches around the country.