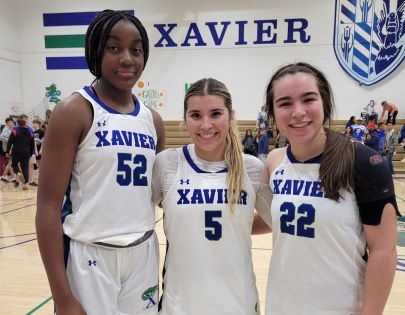 This game matched up two of the upper tier programs in the state. Both teams have solid prospects and I project both to at least make it to the Elite-8 of the AIA Open Division State Tournament.

The game started out aggressive, as both coaches looked to apply full court pressure off the jump.  It felt like a rollercoaster, as both teams exchanged head-to-head with multiple lead changes throughout the game.

In the first half, O’Connor’s Audrey Bhesania hit some key shots, with big plays being made by Mak Snyder and Kaitlyn Elsholz - giving the Eagles solid momentum going into the 2nd half.  Elsholz seems like the emotional leader for the Eagles, as her presence ignites the fire for the team on both ends, with Snyder commanding the defense and offense.

A bit of a surprise on the Xavier rotation, as star point guard Dom Nesland had a quiet first half with limited minutes. Backcourt mate Sienna Cherwinski helped keep the Gators nipping at the heels with front-court anchor Irene Noelle Guiamatsia providing a big inside presence.

Nesland seemed to be the X-factor in the 2nd half, as her presence alone ignited solid defensive stands and offensive scoring runs. In the end, the Gators late run was enough to hold off the upset-minded Eagles. Here are some of the prospects who caught my attention:

The Sonoma State-commit had a huge first half by hitting clutch shots and making plays. Cherwinski can score at all three levels, and if she can continue to contribute, her team should make a deep run in the Open Division playoffs.

Nesland is continuing to rack up offers, as she is a sure-fire mid-major plus prospect with tremendous upside. She made an impact in the game with her playmaking, facilitating and scoring ability. When she’s on the floor, it’s likely her team will hold a lead or climb back into the game. If the Gators want a ring, she needs to be on the floor as much as possible.

Guiamatsia is a player. Although she is still growing into her game, she is capable of being a double-double machine every night, as she possesses good size and length. I like that she runs the floor and shows the ability to finish through contact. An intriguing prospect to keep an eye on.

Snyder is a solid point guard prospect who makes plays. She has a tight handle and good scoring ability at all three levels. Snyder is a solid low major prospect with tremendous upside. I anticipate her continuing to produce the rest of the season.

Elsholz is one of the best under-rated prospects in the state. She holds an Army and West Point offer and has the skill-set, athletic ability, and size to be a good mid-major prospect. Elsholz is the emotional leader for her team, as she can spark play-making ability from her teammates.

Bhesania is another intriguing prospect who will be a highly-sought after prospect in the years to come. She has good scoring ability, length, and feel for the game. Bhesania uses her quickness and length to disrupt passing lanes. Once she matures and realizes how much she can be a matchup problem for opponents, her recruiting stock will go through the roof.