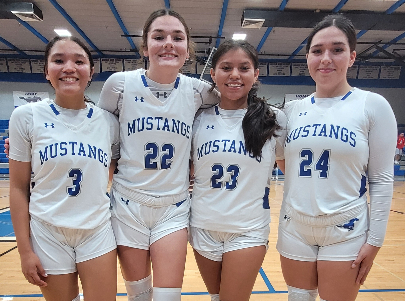 This was a matchup of two solid 6A contenders in the Dobson Lady Mustangs and the Cibola Lady Raiders. The game was a back-and-forth defensive battle from the tip. Both teams are well coached, as Cibola’s Anthony Gerg and Dobson’s Henry Bribiescas have built perennial contenders for their respective programs.

The game came down to possessions, which Dobson guards Aaliyah Garcia, Ahdiayh Chee, and Jaziah Billey made plays and hit key shots to gain the momentum - building a lead to hold off Cibola’s "Big Three" in Isabella Molina, Sierra Bomhower, and Rory Hoffmeyer.

Dobson’s front court (Isabella Jensen, Sophia Fonseca) came up big in the 2nd half with slowing down Hoffmeyer, rebounding, and hitting inside shots. Dobson would go on to edge Cibola 50 to 41.

Dobson’s Aaliyah Garcia led all scorers with 18 points and Cibola’s Sierra Bomhower contributed 15 points in the defeat. Here are some of the prospects who caught my attention:

Garcia is a sniper with range and consistency. She makes good decisions and takes good shots. Her performance impressed me, because her energy and ability to hit clutch shots have made her recruiting stock rise. Garcia will be a solid small college prospect for a team needing a clutch shooter and playmaker.

Jensen compliments her team with good rebounding and interior defensive ability. Another playmaker who rises to the occasion, Jensen made key plays and shots to help keep her team’s momentum going. Another prospect to keep an eye out, as she could be another solid small college prospect for someone needing a combo-forward.

Chee is one of my favorite guards to watch compete. She is one of the more physical prospects who plays extremely aggressive. A three-level scorer who is also an elite defender. Chee will be one of the x-factor’s in Dobson’s playoff run. A nice sleeper prospect to keep a tab on.

Fonseca’s game grew on me, as she is an important role player for her team. She provides an inside presence on both ends of the floor, and shows good ability to clean the glass and score inside.

Billey is an elite floor general who has a tight handle and three-level scoring ability. She can hurt opposing teams with her ability to penetrate, and find open teammates as the defense collapses. Billey is extremely underrated, however her recruiting stock should rise, as she is very skilled for only being a sophomore.

Bomhower is going to be a problem for opposing teams, as she has good athleticism and length to create match-up issues for smaller guards and wings. A three-level scorer and solid defender, Bomhower can flat out compete. I have her as a low-major plus prospect, as I expect her to have a huge junior campaign.

Molina is an excellent floor general with a tight handle, good IQ and feel for the game. She makes good decisions, shows good mid-range and finishing ability. A good small college prospect and she will have a big season this year.

Hoffmeyer is one of my favorite post players in the 2023 class, because she competes hard on both ends of the floor. A solid inside presence, she rebounds well and finishes well inside. If she can improve her mid-range, her stock can go through the roof. She would be a huge steal for any college, as she has a lot of potential and upside.