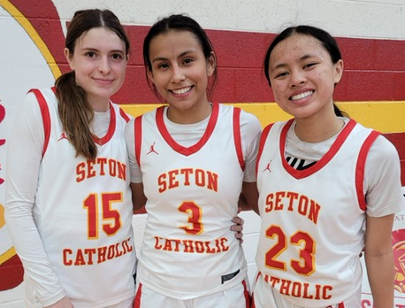 The GC3 Game of the Week is a new series where I plan to feature the top high school and JUCO women’s game of the week. This week I selected the game between last year’s 4A state semi-finalist Seton Catholic and 4A state runner-up Flagstaff. Both teams return some solid prospects and I anticipated it to be a phenomenal matchup.

This was the first game of the season for both teams, so the first half started a little sloppy. The Lady Eagles of Flagstaff came to play - nipping at the heels of Seton Catholic by only trailing by (1) at half. Flagstaff’s junior point guard MorningRain Honani, had an impressive first half by slicing and dicing through Seton Catholic’s defense - finding open teammates or converting offensive opportunities herself.

Although Honani had a huge first half, opposing sophomore point guard Sophie Morales ignited a run by connecting multiple times with her forwards, junior Caitlyn Benally, sophomore Mia DiPuccio and sophomore sharp-shooter Carmella Gallardo, to keep the Lady Sentinels in the game.

The tale of the 2nd half leaned into the Lady Sentinels favor, as senior shooting guard Amelie Cartagena got hot - hitting threes in bunches. As the Flagstaff defense adjusted to Cartagena and Gallardo’s sharp-shooting, it opened up the floor for Morales to penetrate and find Benally and DiPuccio near the hoop, to propel the Lady Sentinels to a 49-37 victory over the Lady Eagles.

This was a marquee match-up between last season’s 4A state runner-up and 4A State Semi-finalist early in the season. I see both teams qualifying for the Open Division Tournament later in the season.

Here are some of the performers who caught my attention:

A potent point guard who does an excellent job in controlling the pace of the game on both sides of the floor. Honani’s game grew on me since watching her this past summer, as she brings tremendous upside on both ends of the floor. She can score at all three levels and has the IQ and decision making to get her teammates involved.

Begay is one of my favorite guard prospects in the 2023 class, as she is a bright talent who competes at a high level. A three-level scorer with a tight handle who can hurt opponents in multiple dimensions if left alone. She plays with the same fire on both ends of the floor, which makes her a complete player any coach would desire on the court. I anticipate her recruitment to continue to skyrocket as her huge performances in the Spring and Summer has increased her recruiting stock.

Morales is a bright talent on the rise, as she is extremely skilled and talented. Coach Karen Self has the right pieces for her team to make a deep playoff run. The key to those pieces is Morales, as she is an elite floor general who thrives in exposing holes in the defense. I liked how she controlled the pace of the game and picked apart the competition. She penetrated the defense and possessed the vision and IQ to find her open shooters or forwards in the paint for scoring opportunities. College coaches put this young lady on your radar.

Gallardo’s game grew on me as the game progressed. Her best attribute is her confidence. Gallardo played fearlessly against her competition and displayed a natural scoring ability on all three levels. She is a talent to keep an eye on, because she is already emerging to be one of the top prospects in the 2025 class.

Cartagena is another prospect I like to observe. She started the 1st half a little slow, however once she caught fire she made it rain from long range. Cartagena is a long range sniper with a quick release and smooth shooting stroke. The accurate sharp shooter helped sparked a run to open the 2nd half to help her team put the game away.

Benally is a solid post prospect who compliments her teammates' games with her inside presence, low post scoring, shot blocking and rebounding ability. She has soft hands and finishes well around the rim. Her length and size will wear down opposing teams all season long.

DiPuccio is another solid post prospect who runs the floor, blocks shots, rebounds, and can score inside. She has a good motor on both ends of the floor and will be a highly sought after college prospect, as she has a good IQ and feel for the game. One of my favorite forwards in the 2025 class.

The JV Game between Seton Catholic and Flagstaff was canceled, so it moved the varsity game to the 5:30 pm timeslot. I was able to drive over to another big time match-up between Perry and Pinnacle to catch the last three quarters of the game. Here are some of the standout prospects who caught my eye at that game:

A Vanderbilt commit, Pierre is a double double machine who has good scoring ability from the inside and mid-range. A big presence on the inside, she is a shot blocking machine and cleans the glass well on both ends of the floor. Perry is looking to make a run for a state championship, and Pierre will be a big part of the equation.

Cal is quick and has a tight handle. She facilitates the offense well and controls the tempo of the game. Her speed and quickness will make her a matchup nightmare night in and night out. A solid guard prospect for colleges to keep an eye on.

Crocker is a nice sleeper prospect discovery. She has good size, runs the floor well, scores the ball inside and knows how to utilize her strengths against weaker opponents to wear them down. Part of one of the strongest front courts in the state alongside teammate Pierre.

Stedman checks all the boxes and passes the eye test. An extremely talented young lady who scores at all three levels. She can handle the ball and shows a lot of confidence on the floor. Her stock will continue to rise, as I project her to be a solid mid-major Division-I prospect, possibly higher.

Singstock is a walking bucket. Her game continued to grow on me, especially her toughness and willingness to battle through adversity. A three level scorer who is extremely crafty and thrives in finishing through contact. Another amazing sleeper prospect for college coaches to keep an eye on.

Escobedo is a stout point guard with great athleticism and frame to withstand physicality. She is scrappy on both ends of the floor and has a good IQ and feel for the game. I like her scoring ability at all three levels however I love her decision making and play-making ability. She seems to make the right play at the right time and her recruiting stock should rise this season.