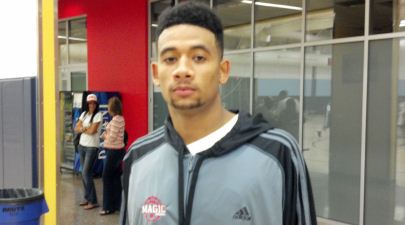 Westwind Prep International 6-foot-5, 220-pound unsigned prep guard Gary Williams is now officially off the recruiting board, after having a big summer performance on the AAU/club circuit.

This week, Williams decided to sign with one of the nation's elite junior college basketball programs - signing a national letter of intent with Indian Hills Junior College in Iowa.  Indian Hills JC head coach Barrett Peery attended several of Williams' games this summer and reeled in the ultra-talented guard prospect.

Still looking to get cleared by the NCAA's Clearinghouse very late, Williams had planned to accept one of the many division-I offers that he had received over the summer, but an inability to qualify academically made Willliams' decision much easier.  Williams plans to attend Indian Hills JC in an attempt to raise his recruiting stock.

Williams will look to play the point guard position for Indian Hills this season - a team that is already being heralded as the nation's top program for the 2012-2013 season.

While playing for the Arizona Magic Elite 17U coached by Kenny Mullins, Williams was an instrumental force for the team, and ranked among the hottest unsigned prospects in the West throughout the summer.

Williams is a serious offensive talent that is capable of scoring almost at will, but is also able to make plays at a high rate for his teammates.  Similar to the NBA's Jason Kidd (New York Knicks), Williams is a very big guard prospect that has a high motor and a high basketball IQ from playing countless hours in the parks and in leagues.

A native of Northern California, where he attended Castlemont High School, Williams ventured to Westwind Prep this year after a brief stint at ABCD Prep in Texas. While a late member of Westwind Prep International’s post-graduate program, Williams missed out on much of the fall recruiting, while he moved destinations and Westwind Prep went through it’s share of problems with the basketball program.

Look for Williams to become one of the hottest juco guard prospects in the near future, while playing for one of the nation's premier juco basketball programs.

Arizona Hoop Review Scouting Report: Williams is a nice-looking wing prospect that is very skilled and is capable of playing either the point guard position, off-guard or the small forward position on the floor. A talented and gifted player, Williams has a very good motor and competes with excellent energy. He likes to have the basketball in his hands where he is able to make plays off the dribble for himself or others with excellent court vision. Likes to play the point position and is a very big guard as a result. Has a very nice handle of the basketball. Is also a very good mid-range shooter and has range out to three-point distance. Has a very strong physical frame that allows him to overpower most guards in the post, where he is able to score effectively around the basket and also rebound and finish the play. A very strong rebounder. A triple-double waiting to happen here, since his size allows him to do so much on the floor. Rebounds hard on both ends of the floor, and uses his size and body to make plays. Also a good defender with good lateral quickness. Has the ability to become a lock-down defender with more focus in this area. An excellent teammate that enjoys winning, and has a great attitude on and off the floor with good professionalism as a player. Very mature.  Excellent sleeper prospect.