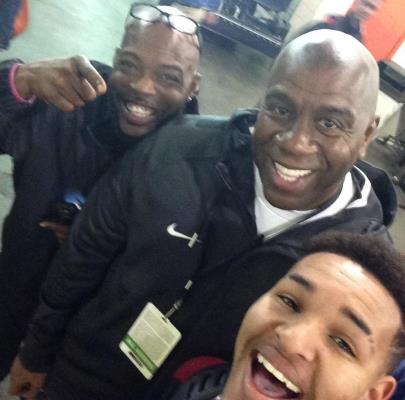 Arizona Preps' staff member, father, friend and coach Gary Thompkins (pictured left) lost his life on Saturday morning, after he was released from life support at John C. Lincoln Hospital amidst his family and friends.  With his wife Kelly and his children, his father and close personal friends in attendance at the hospital on Saturday morning, Thompkins was pronounced dead at 11:40AM on Saturday.

Thompkins suffered a massive heart attack on Wednesday.  As a result, Thompkins was kept on life support until his son Sammy Thompkins arrived at the hospital on Saturday early morning.

A memorial has been scheduled for Gary at Cortez High School, where he was recently an assistant coach for the varsity basketball team.

Currently, Gary Thompkins was working as an assistant coach under the leadership of wonderful and long-time head coach Howard Mueller at Greenway High School.  Mueller, Greenway HS senior guard Scotty Shaver and his father Scott Shaver each were by Gary's side from the beginning to the end at the hospital this weekend.

Former Cortez HS head coach Tarik James, another close personal friend of the Thompkins' family, was also in attendance on Saturday until the end.  Thompkins was an assistant coach for Cortez HS last high school season.

Thompkins (pictured left) is the wonderful father of Sammy Thompkins and Zeke Thompkins, both gifted local basketball prospects.  Thompkins was an amazing father and a friend to the entire basketball community in the state of Arizona.  Many people on Saturday and over the weekend made comments on how long they had known Thompkins, and shared stories of his generosity to them and other players and people in the community.

Gary's father will take him back to his hometown of Jackson, Michigan for his funeral.  Thompkins was celebrated for a terrific high school and college basketball career in Jackson, and was recently rated among the Top 3 prospects to ever come out of the area.