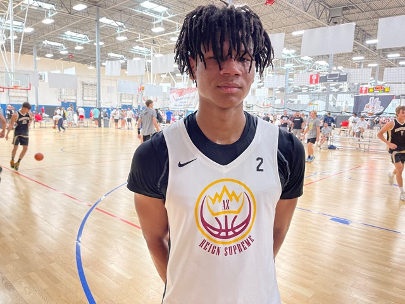 With the 2021-2022 high school basketball season now upon us, and set to get going in a major way next week, as pre-season basketball tournaments will begin kicking off next week for boys and girls basketball in the state, there are numerous prospects that will look to have big seasons for themselves. This up-and-coming high school basketball season is already exciting, as it will be a much more normal experience, after a serious COVID-stricken season last year made it difficult for players, teams and spectators to navigate and observe. One prospect this season that is looking to build on his previous success and prove his value to college coaches around the country is St. Mary's High School's ultra-athletic 6-foot-7 senior wing Garrison Phelps. After helping lead the Knights to a 4A State Championship last season, Phelps returns this senior season to have his biggest high school season to date.

Among the elite prospects in Arizona's 2022 Class, and wile many other top-rated members in the class are now off the recruiting board, Phelps remains as one of the top uncommitted prospects in the state. While Phelps is still available, he has yet to fully see his college recruitment take off to the level he deserves, so this season should be a very exciting one for him and his family, as he should be able to raise his recruiting stock a great deal, as the Knights return a loaded ball club that has gained maximum experience after a state title performance last season.

Currently, Phelps has (4) Division-I offers to his credit from Oakland, Texas State, Missouri State and Montana. These are each nice offers for Phelps, but many more schools will look to get involved with him after another strong performance during his senior season, as Phelps is as athletic a college prospect as there is remaining uncommitted in the 2022 Class in the state. We could see Phelps makes as dramatic an improvement in his college recruitment in the state, as any other prospect around.

Phelps is set to do so, as he has gained valuable experience over the past two high school seasons at St. Mary's under the strong leadership of Head Coach Damin Lopez, and also played against some stiff competition throughout the spring and summer. While traveling with the Arizona Supreme club program, Phelps had numerous strong performances and many learning experiences as a player - all experience that should help him raise his overall level of play and understanding of the game this high school season, his final one in the AIA high school ranks.

Last season, while helping lead St. Mary's to a strong 21-1 overall record on the season and a state title, Phelps was a leader for a younger team, that this season lost the services of star guard Jason Fontenet to a transfer (Bella Vista Prep). Phelps, alongside a talented group of now older prospects, will become the focus and will benefit a great deal from the floor general mentality of talented sophomore guard Styles Phipps. The combination of Phelps and Phipps should be very exciting to watch and make for numerous highlight reels this high school season.

Phelps has grown a great deal and has really grown physically over the past two years that I have observed him as a player.  He has now grown to 6-7 in height and has gotten much stronger physically, and is an ultra-athletic wing prospect that can make plays from anywhere on the floor. He plays well above the rim these days and is a highlight reel performer, either in transition where he is now as good as any prospect in the state, or while slashing to the basket in the half-court set. He will only will get much more impressive physically over time, and still has very good upside as a player. Phelps has really improved in his ability to make shots from anywhere on the floor, as he has improved his ball handling and ability to make shots consistently from longer ranges on the court. His play-making ability is also much improved, according to Damin Lopez, and he has become a catalyst for the Knights' future offense, as much of the offense will go through him this season.

I look forward to watching Phelps and his Knights' teammates this high school season, as they look to bring home another 4A State Championship for the St. Mary's basketball program. I also look forward to seeing Phelps' college recruitment begin to take off this high school season, in preparation for a nice spring signing for him, if he decides to sign this spring. It will be very interesting to see which college program ultimately lands this athletic talent.