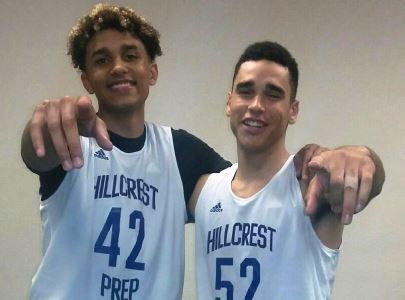 Basha High School's talented and promising 6-foot-6, 210-pound prep forward Gabe McGlothan has been in the news for some time now, after deciding to leave Army West Point this fall and re-open his college recruitment.  While it looked as though McGlothan would decide on another college program for his next destination, instead he has landed at Hillcrest Prep Academy, where he will now play for the program's National High School team this high school season.

After speaking with the Hillcrest Prep coaching staff today, assistant coach Paul Suber advised me that McGlothan never actually signed with the West Point program, and instead was slated to attend their prep program this season at the school.  As a result, McGlothan will now be designated as a post-graduate, and will play for Hillcrest Prep's National Team.

McGlothan advised me that he currently has the most recruiting interest right now from Portland, UC-Santa Barbara, Grand Canyon, Portland State, Eastern Washington and Cal Baptist.  He also advised me that he is currently receiving strong interest from many more college programs.  Look for McGlothan to receive loads of division-I interest and scholarship offers throughout the high school season.

McGlothan is a sure-fire talent with loads of potential and high-major athleticism.  He is a very gifted athlete with excellent size and a solid overall skill level.  He plays the game with passion and is capable of making plays most players in the state, regardless of class, cannot make.  College coaches see him as an undersized athletic four-man, that will be a mis-match for opposing forwards.  He will need to continue to improve his ball handling and shooting from the perimeter to prove himself as a consistent wing prospect for the future.

McGlothan quickly emerged as one of the elite prospects in the 2017 class early on in his high school career, and was tremendous during his senior season - leading Basha High School to a 6A State Championship and an impressive 31-1 overall record.

Look for McGlothan to have another big prep season for himself, alongside a very talented group at Hillcrest Prep, and get recruited heavily by numerous college programs across the country.

Arizona Hoop Review Scouting Report:  McGlothan is a big-time athletic talent with an excellent body that is very live.  He has a superb body with a serious motor, combined with unique athleticism.  He is a superb talent that has the motor and activity to make plays that most players his size cannot - a very nice attribute.  McGlothan is an excellent looking prospect with a solid overall skill level, and an ability to play inside and out, although he still needs to add consistency to his jump shot at longer ranges.  He plays well above the rim, making him tough to defend and keep off the glass.  A very active rebounder and a good shotblocker.  Runs the floor hard.  Excellent finisher in traffic.  Has a very bright future ahead of him with continued hard work and focus on his craft.