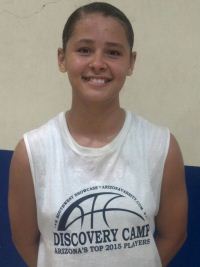 While Mesa Mountain View (29-3) would come up just short this high school season on winning the state title, the future is extremely bright for the Toros' girls basketball program.

This season, Mountain View head coach Henry Bribiescas had himself a very talented group of girls - a team that also included some of the state's best young prospects.  One of those prospects saw a lot of action this season as a mere freshman on a team that held the #1 seed heading into the Division-I state playoffs.

5-foot-8 freshman guard Sabrina Haines came off a terrific middle-school career, and jumpoed right into the thick of things for the Toros this season.  Haines started the majority of games for Mountain View and prodcued mightily for the team - averaging 7.1 points and 3.7 rebounds per/game on the season.  On a well-balanced team that only had one senior on it's roster, talented 5-foot-9 senior guard/forward Arneica Hawkins (Arizona State signee), Haines scored in double-figures 8 different times on the season, with her best scoring output - 13 points in a big 59-22 blowout win over Skyline HS.

With the Toros returning almost every player next season, Haines will have a much bigger offensive role next season and has a very bright future ahead of herself.

Haines is a tough, physical guard prospect with a nice fundamental skillset that allows her to overpower much of her competition.  As she continues to mature, she will become an absolute force with the basketball in her hands as she gets to the basket and finishes agressively.  Even as a mere freshman this season, Haines had very good success finishing at the basket.

Haines is also a good shooter with range.  She is at her best at this point in her young career off the dribble and from mid-range, although she is also capable of stretching the defense.  Next high school season, look for her open up her game much more and shoot the basketball more often from the perimeter, which will open up her drives to the basket.

She is a good ball handler and is capable of playing either guard position on the floor in certain situations, but is best as a coing guard where she is able to do what she does best - score the basketball.  Haines is a solid passer of the basketball, although she needs to continue to develop in this area.  Playing on such a well-balanced Toros' team this season will help her as she progresses as a player.  As she becomes a better passer and learns to make players around her better, she will reach her full potential as a player.

Haines is a very good defender and has good lateral quickness - allowing her to play passing lanes and apply very good defensive pressure on the basketball.  She has the potential to become a lock-down defender in the future, which will make her a complete player/prospect.  This area is one of her best assets as a player.  Haines had a season-high of 5 steals in wins this season over Mesa and Xavier HS.

Already rated as one of the very elite prospects in Arizona's very good 2015 class, Haines has a bright future ahead of herself and will continue to team up with fellow 2015 star guard Armani Hawkins - giving Mountain View the state's best young backcourt for the future.