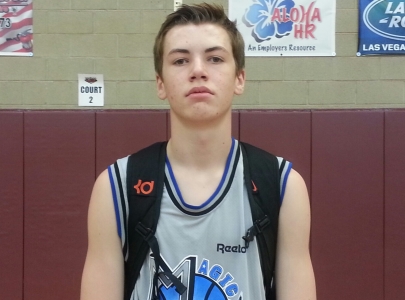 It is still extremely early for Arizona's 2018 class of prospects, but several prospects have already made a big name for themselves among the group.  One prospect that is currently emerging to the top of the class is Desert Vista High School's rapidly developing 6-foot-10 rising sophomore post Steele Bennett.  Bennett is coming off a very good spring performance, and is already posting big games for his high school program during the month of June.

Everyone in America is already aware of superstar post Marvin Bagley Jr., while other prospects in the class such as K.J. Hymes and Timmy Allen have also reeled in scholarship offers already.  The next big-time prospect in the class is definitely Bennett.  Already standing 6-10 in heigth, Bennett has grown very early in the maturation process and looks to be headed for 7-feet, if not taller before it is all said and done.

Bennett is coming off a superb spring showing, where he helped lead his club program to two consecutive tournament titles in both Pangos events this spring.  After a strong spring perofrmance, Bennett has now played very strong this June with his high school program, and this week poured in 37 points and 17 rebounds in a summer league game with Desert Vista.

Very rarely have we seen so many young freshman prospects emerge so early in the recruiting process, but it is becoming more and more common in the state these days, as student-athletes are now playing the game of basketball year round and much earlier in age.  Bennett is another strong indication of the fact that Arizona basketball is on the rise.  This young man is a sure-fire talent for the future.

Bennett is a long and skilled post prospect with a soft touch from the perimeter.  He has has a nice overall feel for the game at such a young age, and looks to have glaring potential for the future.  He runs the floor and finishes strong at the rim.  He is also an active rebounder and shotblocker - two areas of his game which he should blossom in over time.  While he is still very thin physically and needs a lot of maturity to realize his true potential as a player, this young man is off to an excellent start.

Very rarely has the state seen so many quality young post talents with high-major division-I potential.  Bennett is another young prospect that should become one of the state's best over time.

I will continue to follow the progress and recruitment of Bennett throughought his high school career, and bring you updates as they continue to develop for this budding young performer.