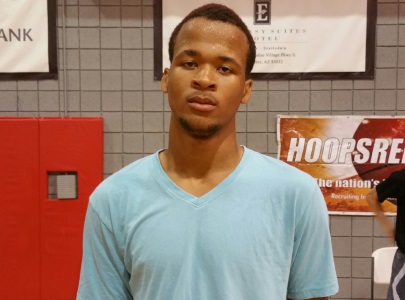 Desert Vista High School's very talented and gifted 6-foot-7, 210-pound freshman forward Walter Talley has many basketball enthusiasts in the state excited about his tremendous potential for the future.  He also has college coaches excited about his potential for the future as well.  After an up-and-down high school season while playing for former Desert Vista HS head coach Tony Darden, Talley has dominated on the AAU/club circuit this spring, while playing at the 16U level for the Arizona Powerhouse Hoops' program.

This weekend, while competing in the So Cal Hoop Review event organized by Gerry Freitas and Ryan Silver in Los Angeles, CA, Talley received a big scholarship offer from a PAC-12 program, as Washington State University and assistant coach Silvey Dominguez extended an offer to Talley for the future.

Talley has been terrific this weekend in leading his club team, which is absolutely loaded with talent, to a strong start in the event.  The offer came after Talley would lead his team to a big victory over the Earl Watson Elite 16U program.

Talley recently moved to the state of Arizona from New York.  Talley has been a very nice addition to the state of Arizona's class of prospects, and, since moving to the state, he has become one of the state's hottest young prospects.  Talley is not your typical freshman prospect either.  He has excellent size that you normally do not see in a prospect his age.  While Talley is a little older than your usual frosh prospect, it will suit him nicely over time as he grows older.  Talley already possesses good physical strength on his frame and also good overall physical size.  He has the potential to really develop over the next three years into something special, since he also has a very good offensive skillset that he picked up on the East Coast as a youngster.

Talley is a small forward prospect currently that likes to play inside and out.  He is able to score effectively around the paint, and also has a nice ability to step outside and shoot the basketball as well with a good shooting stroke.  He has very good versatility as a player - allowing him to play multiple positions on the floor, although he is at his best currently as a post player.  As he matures, he should be able to do much more on the perimeter.  Talley has a very good handle of the basketball, so he is capable of playing in the open floor, but his best asset is his physical toughness and ability to rebound and finish around the basket.  He has a very good mid-range game, which allows him to score effectively around the paint and from the perimeter.  Talley is quicker than most power forwards on the perimeter, and he has the size to overpower most smaller players - taking them into the post as needed.

Arizona Hoop Review Scouting Report:  Talley recently moved to the state of Arizona, and immediately became one of the elite young prospects in the state.  Talley has excellent size already and physical strength. While he likes to play on the perimeter, he often finds himself playing inside as a result of his physical strength and toughness.  He is capable of playing either position, but he gets a lot done inside the paint and around the basket.  Over time he will develop into a serious 3/4 prospect.  Talley has very good athleticism and is always around the basketball.  He runs the floor hard.  Has excellent work ethic.  An excellent finisher and a very good shotblocker for his size.  A big-time prospect for the future.