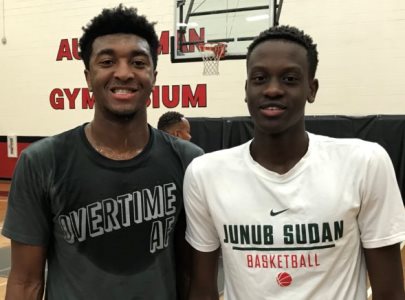 PHOENIX – It took little more than 12 months for the Southwest All-American Camp to establish itself as one of the most prestigious summer of events of its kind in the west.

That truth was held to be self-evident on Sunday afternoon, when camp action wrapped at Cortez High with three all-star games made up from among the 100-plus players who participated in the two-day affair.

And the Top 20 All-Star game-finale proved much more competitive and well-played than the usual such contests that conclude most camps of the same ilk.

Kyree Walker (Hillcrest Prep in Phoenix) led the black jersey-wearing squad’s rally from a 15-point deficit to get to within just a deuce in the final minute before the white jerseys prevailed, 81-77.

The 6-foot-5 Walker bullied and powered his way to a game-high 24 points before missing a couple of close-in attacks on the rim in the late going.

Many props are in order for Gregg Rosenberg, Anthony Ray, Justin Vargas and the rest of the crew that had things humming along so well over two days.

Anyone – be it within Arizona or any surrounding state – who turns down the opportunity to play in this thing a year better have a solid justification for saying “nope”.

On to my choices as the Top 10 players in the camp, with the caveat that four of the very best prospects in Arizona – Jerry Iliya (Paradise Honors in Surprise), Shon Robinson (Higley in Gilbert), Emmanuel Taban (Apollo in Glendale) and Stephan Gabriel (Hillcrest Prep) – weren’t on hand Sunday after playing two games apiece Saturday:

Best from Class of 2019: Jackson Ruai (6-4/Tucson Amphitheater/PICTURED). Ruai, who came to the U.S. from Sudan at 3 years old, dazzled onlookers with his jump shooting and spectacular, high-flying finishes on Saturday. On Sunday, the jumper wasn’t falling with the same regularity as the day before but no one passed as well as he did, nor made any better effort on the defensive end than Ruai.

Best from Class of 2020: Kyree Walker (6-5/Phoenix Hillcrest Prep). It’s been quite a month or so for the beastly Arizona State commit: the Pangos AA Camp, NBPA Top 100 Camp and this event.

Best from Class of 2021: Jahmai Mashack (6-3/Etiwanda in SoCal). The most prominent of the non-Arizona players in camp, Mashack led his school’s junior varsity to an unbeaten record last season before making his varsity debut in the California Sectional and Regional playoffs. Based on his four games here (including All-Underclass All-Star clash), it’s easy to understand why Etiwanda Coach David Kleckner was raving about him even last November.

And, the next seven (alpha listing):