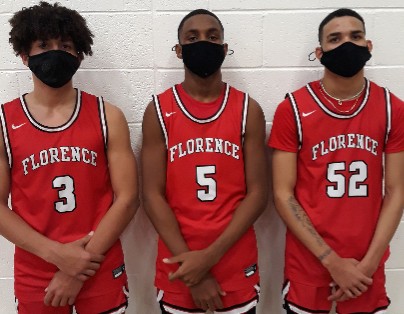 One of the state’s oldest rivalries took place in Central Arizona between the Florence Gophers and the Coolidge Bears. Friday evening, Florence hung on to squeak past Coolidge, 55-50 in overtime. It seemed like the Gophers played with a lot of energy, as they were led by their senior backcourt in Eddie Chapple and Malik Payton. Junior guard Chris Famer, also made a strong contribution - complimenting Payton and Chapple’s strong performance.

Midway through the 2nd half, Florence led by as much as 10 points. In the 4th Quarter, Coolidge surged back, by cutting the lead down to 4 and eventually tying the game with about :10 seconds left in the game.

Coolidge had a chance to tie it, but Florence surged on defense - creating an opportunity to hit a shot to send it to overtime. Coolidge had a few weapons of their own in seniors Nick Harrison, Kishon Butler, and Kameron Steward.

This game was fun, since both communities have been rivals for decades. The game was filled with numerous small college prospects. Here are the performers who stood out:

2021 - Florence - 6-0 G Malik Payton - A nice athletic prospect with nice quickness and scoring ability. He has nice leaping ability who can finish strong at the rim with consistent shooting at multiple ranges.

2021 - Florence - 6’2 G Eddie Chapple - A nice athletic guard who loves to slash, but can hit shots at the mid-range and perimeter. Possesses a nice motor that can get up and down the floor.

2022- Florence - 6’0 G Chris Farmer - Plays fearless on both ends of the floor. Has a nice ability to slash and finish at the rim. Also has a decent mid-range scoring ability.

2021 - Coolidge - 5’9 G Nick Harrison - One of the state’s best catch and shoot shooters. Impressed with his IQ took 4 charges in the game. A lethal scoring option if left open.

2021 - Coolidge - 5’11 G Kishon Butler - Another athletic prospect who shows a strong ability to defend. Has a nice motor who gets up and down court on both ends. A nice slashing guard who can finish strong.

2021 - Coolidge - 6-3 F Kameron Steward - Has decent back-to-the-basket post moves. Still a raw prospect, but has potential to grow. A “Dennis Rodman” type player who finished with 14 points and 8 rebounds.

2023 - Coolidge - 6-4 W Brayden Gant - Son of Coolidge Legend Terrance Gant has a high ceiling. Very athletic with a knack for cleaning the glass. Has a decent mid-range and finishing ability.

Notes: Florence High Coach David Silvas has done a phenomenal job with his program. He is in his 8th season and is on track to have a 7th winning season (in his 8 years as a head coach) with a playoff berth in each season. Coach Silvas is definitely creating a legacy of his own.

Despite the loss, the Bears of Coolidge have a bright future with Legendary Coach Dave Glasgow returning to his coaching roots after years of leading Buena High School in Sierra Vista, AZ. The Bears have some elite athletes in the sophomore, freshman and middle school classes. Two elite middle school prospects planning to attend Coolidge include (2025) 5-8 G Carlos Coronado Jr. and (2026) 5-8 G Tory Gholston. Adding to a bright future are prospects (2024) 6-4 F Isaiah Slaughter, (2024) 6-4 F Tommy Ellis and (2023) 6-4 F Brayden Gant.

I look forward to covering this rivalry for years to come.