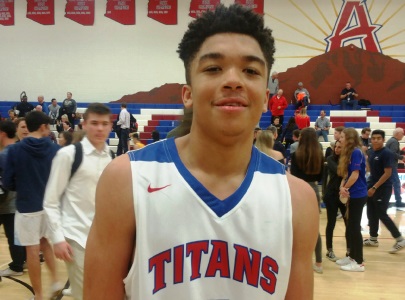 Arcadia High School (15-3) has played some great basketball this season under head coach Stephen Danford.  On Friday evening, the team would face a bigtest at home aginst rival Chaparral High School.  Behind the strong play of senior guard Max Moses and 6-foot-3 junior guard Jaylin Fleming, Arcadia would get the big home win, 51-50.

Chaparral would cruise to a 31-23 halftime lead.

In the third period, Arcadia would come out with new vigor and good confidence as a team.  Arcadia's Fleming is a transfer from Chicago, Illinois, and is now playing his best basketball of the season.  A driving basket by Fleming and then an assist to teammate, Max Moses for a three-pointer would allow Arcadia to take the game's momentum early in the third period.  After a nice mid-range jumper from Max Moses, Arcadia would take the game's lead for the first time, 31 to 30, with 6:28 left in the third.

Moses would then get a steal and a nice transition layup to keep his team ahead, 32 to 31.  An offensive put-back on his own missed shot by Fleming, and then a nice step-back three-pointer by Moses would allow Arcadia to lead 39 to 38 after three quarters.

In the fourth period, and after sitting for about 6 minutes in the third period, Colten Kresl would look to get Chaparral going.  Three consecutive baskets by Kresl would put Chaparral ahead, 50-49, with :47 seconds left to play - setting up the game's big moment.

After a timeout and with :19 seconds left to play, Jaylin Fleming would take the ball at the top of the key.  He would survey the floor and then attack the basket after a nice cross-over dribble.  Fleming would then shoot a floater over two Chaparral defenders to give Arcadia the win, 51-50.