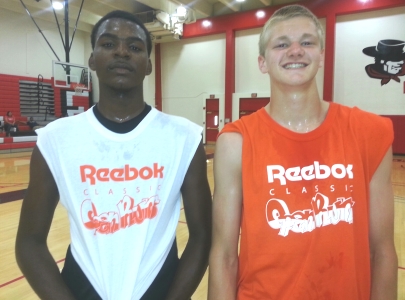 The Arizona Reebok Classic Open Run took place on Sunday, May 12th, 2013 at Glendale Community College.  Registration was open to all high school basketball players, in an attempt to name the invitees from the state of Arizona for this year’s annual Reebok Classic Breakout Camp, which will be held this summer in Philadelphia on July 9-12th.

The Reebok Classic Breakout Camp features more than 100 of the nation’s elite prospects, and is held during the NCAA evaluation period on the campus of the University of Philadelphia in front of more than 400 college coaches from across the country.

The Reebok Classic Breakout Try Outs will take place in 13 locations throughout the country this spring, with many of them being held this month.  Each try-out camp will be held in their respective parts of the country to select the top performers from each camp for the annual camp held in Philadelphia, PA.

As a result of this year's Open Run event, our Reebok staff has selected the following four individuals from the state of Arizona for participation in this year's Reebok Classic Breakout Camp in July.

Each of these four prospects earned their invitations to this year's camp as a result of their strong play in last weekend's camp tryout.

Congratulations to each of these fine young men and good luck in their future performance in this year's star-studded annual camp.