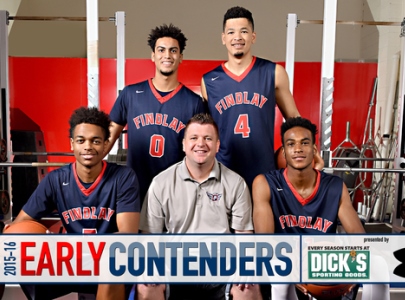 On Saturday, January 9, 2016, the #4 high school team in the country, Findlay Prep from Las Vegas, Nevada, made a return trip to Arizona to meet up with one of the better high school programs in the state of Arizona - Pinnacle High School.  The game was held on the campus of Arizona Christian University and many local, as well as out of town fans, packed out the gym from start to finish in anticipation of the match-up.

The game started off relatively close with a quick 3-pointer and put-back from Pinnacle's talented young and developing 2018 prospect Patrick Kelly, but powerful Findlay Prep would then pull away soon after - entering halftime with a score of 55-31.

The second half would be more of the same, as Findlay fully dominated on both ends of the floor, and would get a majority of their points on fast breaks and run-outs.  The game concluded with a final score of 95-53 in favor of the Findlay Prep Pilots.

From what I personally observed during the game, here are my notes from the game . . .

2017 PG 6’0 Markus Howard of Findlay Prep dominated every minute he was on the floor.  He was knocking down open 3-pointers from all over the court at a great clip, as well as taking his defenders off the dribble to the basket with ease.  He recently visited Arizona State last weekend for their game vs. the University of Arizona.  He is one of the elite 2017 PG prospects in the country.

2018 SF 6’7 Patrick Kelly of Pinnacle was one of the more intriguing prospects on the day.  He has a very long frame for someone so young and also contains a very high skill level from the wing position.  He was productive with his time on the court, and will continue to develop as he matures and grows fully into his body.

2015 6’6 PF A.J. Elliot of Pinnacle impresses me every time he plays.  He is one of the toughest players in the state of Arizona, and will not back down from anyone.  Elliot thrives off of contact in the lane, and is very active on both the offensive and defensive boards. Elliot has signed to play at Point Loma University.

2017 6’9 SF O’Shae Brissett of Findlay Prep displayed an improved shooting stroke from the 3-point line and in, since the last time I saw him play in December vs. Desert Vista and Shadow Mountain HS.  Brissett also has a soft touch in the lane, and makes reads on how to score on his defender in regards to how they are playing him when he is on the perimeter, as well as the post.  He is one of the better prospects in 2017 on the West Coast and beyond.

2016 CG 6’4 Carlos Johnson of Findlay Prep looked very solid all game on both ends of the court.  He accounted for many of Findlay’s steals by being in the correct defensive position.  He also excelled highly in transition per usual, and finished many of his plays with big-time dunks.  He was able to knock down open shots as well.  Johnson has signed next year to play at the University of Nevada-Las Vegas.

2019 PG 5’11 Trent Brown of Pinnacle is one of the better 2019 prospects in the state of Arizona.  A tough, heady guard, he competed all game and knocked down a majority of his open looks from the 3-point line.

In limited minutes played, 2017 PG 6’3 De’Von Cooper was an offensive spark-plug off the bench for Findley Prep.  Cooper has a very smooth shooting stoke from the 3-point line, and scored in bunches from all over the court.