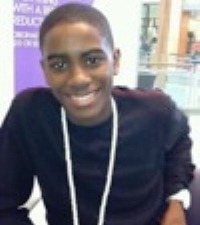 After watching all the games, I have developed a list of the Top-10 2015 prospects, and also the Top-10 2016 prospects from the event.  I also have four other prospects that I thought people might want to know about since all 4 could be special from the 2017 and 2018 classes.

Here are my top 2016 prospects from this weekend's Showcase event ...

Bryce Fisher  5-10  FR  PG  Perry HS - Bryce is the purest PG you will see in the class.  He just gets the sport of basketball.  He reads plays before they happen.  He will pass to a spot before his teammate realizes he is open.  He has a developing 3-point shot and mid-range jumper.  Most of the time, he blows by his guy with his "And-1" handles.  The ball, as they say, is on a string for Bryce.  He can do anything he wants with the ball, and sometimes make the defender look bad.  He mainly drives left, but I saw him, a few times, drive right and finish a lay-up.  Going forward, he will have to continue keeping the defense honest with a more consistent outside shot.  Also, if he adds a little floater to his game, he will be even harder to guard.  Bryce seems like a mid-major prospect at this early stage of his career.

Nick Brewer  6-2  FR  PG/SG  Corona Del Sol HS - Nick is a deadly spot-up shooter.  Might be the best shooter in the class.  He has comfortable 3-point range and a great mid-range game.  At already 6-2, he can easily shoot over almost all the guards in his class.  He also is very comfortable with the ball.  Although not a pure PG, he can handle the secondary duties of a facilitator.  He makes very good passes throughout the game, but normally is looking to score.  He is able to set up his teammate with his handles to rise up and fire.  His form is flawless and he never seems to rush a play.  He sometimes holds his shot too long in the air when he misses.  To improve his game, he will have to work on his overall quickness and defense.  A very nice and quiet kid off the court with very supportive parents.  According to his family, he might grow to 6-5, which will help him secure a SG spot in a low to mid-major program.

Darius Goudeau  6-3  FR  SF/PF  Mesa HS - Darius, at this stage of his career, is very advanced amongst his peers.  At a long 6-3, he can handle the ball like a guard and post up the bigs in the paint.  His post game is very advanced as well.  He knows the drop-step, the fake-and-go, and gets position early, so it is easy when you receive the ball.  He also out-hustles his defenders for lay-ups, since he is a great runner.  Another great skill of his is that he has the ability to double-jump for a rebound, which is very hard to do.  He normally secures rebounds because of this.  To further his game, he will need to extend his range on his shot if he switches over to the small forward position full-time.  This prospect is a low to mid-major prospect.

James Scoggin  6-4  FR  PF  Chandler HS - James already has a body to bang inside the paint, and has a nice soft touch out to 15 feet.  He is almost a stretch-4, but since he also likes to mix it up inside, put it on the floor and drive to the hole at times, he is not.  He does think shoot first, especially if the defender has his hand down.  He is most comfortable from mid-range.  If he is in the paint, he is very strong and relentless to grab some rebounds.  He will have to continue to mix up the shot with the low-post game over the next 4 years.  He seems to still be growing more, so hopefully he will get to at least 6-7 or 6-8.  A low to mid-major prospect.

Eddie Huff  6-2  FR  PF  Apache Junction HS - This lefty has a nice touch on his shot.  He seems extremely strong and doesn't fear contact at all.  He will take the ball straight to the defender and bounce off his body.  He also tries to out hustle every player on the court.  His motor is very high, only being a freshman.  He is a true blue-collar power forward.  He will have to improve his ball skills to go to another level and for his game to keep growing.  This high-effort prospect is a low to mid-major prospect.

Dontez Thomas  5-10  FR  PG  McClintock HS - Dontez is a lock-down defender.  He probably had 10 steals in 4 games with his long arms.  He doesn't stop there.  He also has strong handles with very good vision.  I also like his studder-step he uses often to get by his defender.  Once he is open, he can hit the 3-point shot very easily.  At times, he takes some bad shots, but his overall game, from start to finish, is always helping the team.  He needs a better left hand and can add a floater.  This thief on the court is a low major prospect.

Eddie Sabinbona  5-10  FR  PG  Peoria HS - Eddie is a quick, shifty PG with real strong handles.  He keeps his head up as he dribbles and tries to find the open man.  He had some beautiful passes in the 2 days at the event.  In the open court, he is a special player, since he can glide by defenders at will.  He sometimes gets in trouble with forcing passes and getting a little careless with the ball and becoming out of control.  He can shoot well at both levels, but his main tool is setting up his teammates.  He needs to improve his left hand and his decision making.  This true facilitator is a low-major prospect.

David Cummard  5-11  FR  SG  Mesa HS - David has an extremely high IQ and it's not surprising, since he is former BYU star and Mesa HS graduate Lee Cummard's nephew.  David plays the game the right way and uses all his skills he can on the court.  He has solid handles, a good use of his left, keeps his head up, out smarts his defenders and scores the ball really well.  He lacks a deep shot in his game and, at only 5-11, he might have to switch over to the PG spot in the next 4 years at Mesa. Since Lee was 6-7, he has the genes to grow, and I'm guessing he does.  This next in line Cummard is a low-major prospect.

Jamil Davis  5-11  FR  PG  Casa Grande HS - Jamil has solid handles and a very nice shot.  He changes speeds well with his handle and keeps the defender off balance.  He is more of a scorer right now than a facilitator.  Once he gets by his man, he is looking to shoot, not pass.  He can make the occasional nice pass, but it's rare.  His floater is ok and he can finish off his lay ups. Needs better use of his left hand and also needs to develop more of a true PG mentality.  This scoring PG is a low-major prospect.

Shane Birch  6-4  FR  PF  Mesa HS - Shane, right now, is a garbage man at this stage of his career.  He is the only player that didn't make the All-Star game that I wrote about today, but every team will want Shane.  He does the dirty work inside and cleans up all the bad shots on the glass.  His motor his high, but his skill level is low.  He is a tireless worker that is trying to improve his game.  He won't make a shot outside the paint, and may miss some easy baskets, but he never gives up on any play.  The Mesa kids seem to love Shane and I can see why.  I'm guessing his skills will come around over the next 4 years.  He could become a low-major prospect and maybe even more over time.

Morningstar Takapu  6-6  PF  Thomas Heck MS (2017) - Morningstar is a big, strong kid who just happened to be the tallest player at the event.  He has an advanced IQ, as he made many real nice passes into the post or out of the post.  He altered and blocked a few shots along the way, and made some nice turn-around jumpers from the post.  He will have to keep his body in great shape to maintain his high level of play.  He sometimes drifts to the perimeter and tries to take his man off the dribble. He will need to improve that to further his game. This big prospect is a mid to high-major prospect.

Leon Chavez  6-3  C  Rancho Gabriella MS (2017) - Leon is a true big-man.  He never leaves the paint.  He isn't afraid of anyone.  With his size and weight, he easily boxes players out and grabs rebounds.  He is very comfortable in the middle - doing all the dirty work.  He went toe-to-toe against all the big players at the event and held his own.  He will have to stay in shape throughout his career and add some ball skills to go along with his rebounding ability.  This strong kid is a low to mid-major prospect.

Bryan Baptiste  5-4  PG  Jo Combs MS (2018) - Bryan is only in 7th grade and made the all star game.  He holds his hat with his high IQ, strong in-your-face defense, and makes teammates around him better.  He is already directing traffic in games, which you will almost never see - let alone from a 7th grader.  He was calling out picks and telling his bigs to come up to give him a pick.  He made some full-court passes along the 2 days to on-the-move teammates, and hit them in stride.  His shot is solid and has good form.  He will have to continue to work on his outside shot, and, as he grows, he will have to learn how to do things quicker in a half-court set, and become more assertive.  This strong kid is a low to mid-major prospect.

Boo Boo Woods  5-4  PG  Cotton Bowl MS (2017) - Boo Boo is kind of a stud.  He has tight handles, a 3-point shot, great hesitation moves to keep defenders off balance, plays a smart game, has the floater shot, but is only a skinny 5-foot-4.  He obviously can't control his height and weight, but what he does control is the play on the court.  He is a true scorer that can get any shot off he wants against any height, since he creates space with the use of his disgusting handles.  He actually made a kid fall after a fast cross-over dribble.  He will hopefully grow and continue to include his teammates in plays, which would make him a must-have prospect.  This shifty PG is currently a low-major prospect.