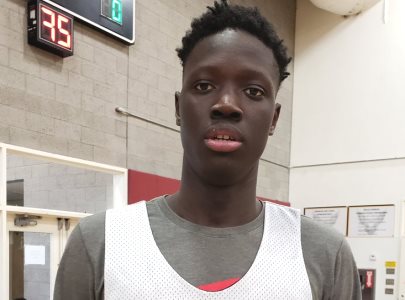 The AZ Compass Prep program has developed a great deal over the past three years, since the emergence of the program's desire to create a national prep basketball program. After two consistent seasons where the program has produced some top-rated collegiate talent, the program prepares to enter the 2019-2020 basketball season with the program's best collection of talent yet. This week, the program announced that 6-foot-11, 210-pound rising senior post Fallou Diagne would be joining the Chandler-based prep program.

The move comes in very surprising fashion as Diagne was very happy with Tri-City Christian High School, also located in Chandler. Diagne was an absolute force for Tri-City Christian last high school season, as he helped anchor the program's lineup that would finish as the runner-up for the CAA Division-III State Championship last season among charter schools in the state.

Diagne is a rare find in the state of Arizona, standing a full 6-foot-11 in heigth. Diagne is a very versatile and skilled post prospect with a nice ability to score inside and out effectively, as a result of an advanced offensive skillset and an excellent motor. He is still a little raw offensively, but he has excellent potential for the future.

Many more schools should look to offer Diagne this summer, as he prepares to enter his senior season at AZ Compass. Compass should be flooded with college coaches this high school season, as a result of all the talent that will be at the program this season.

The decision by Diagne to leave Tri-City Christian, where he was well taken care of by the school and the coaching staff, was a major one for Diagne - one that surprised those in the basketball community. Diagne though will blossom in the Compass program with many college basketball prospects around him daily. He will anchor a loaded group of players that should take the West by storm next season.

Arizona Hoop Review Scouting Report:  Standing a full 6-foot-11, Diagne is a very versatile and skilled post prospect with a nice ability to score inside and out effectively, as a result of an advanced offensive skillset and a developing shooting stroke with range.  He has an excellent motor that allows him to compete at a high level on both ends of the floor. Fundamentally sound already, Diagne simply needs maturity and more physical strength to develop as a player. His ability to make shots from the perimeter, and also put the ball on the floor and create for himself are very unique skillsets that he possesses at a very young age.  He is a very active post player that blocks shots and finishes strong around the rim.  He is still a little raw has still also needs a lot of time to develop, but his potential for the future is limitless.  He will develop into a complete mis-match for opposing post players over time, as he can score effectively inside and out.  Very few post players have his ability to play inside and out, and he also has excellent length and adequate explosiveness off the ground. Over time, he will develop into a very good stretch 5-man.  He is still growing a great deal as well, so he could get to 7-feet in height before it is all said and done.  Has a very bright future ahead of him.