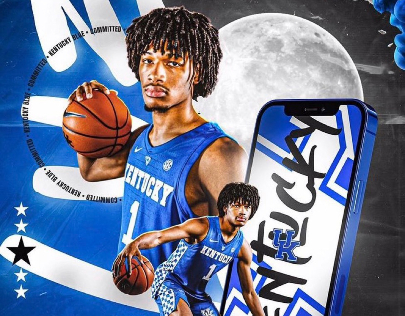 The NCAA's Fall Signing Period began for boys and girls basketball prospects on Wednesday, November 10th nationally, and will continue this week until Wednesday, November 17th. During this early fall signing period, prospects around the country in America's 2022 Class will be signing national letter of intents (NLOI's) with their respective college programs of choice. In Arizona last week, many different prospects around the state signed national letters of intent. With many Arizona basketball prospects making it official last week, and still looking to do so until this Wednesday (10/17), the NCAA Fall Signing Period was highlighted by the nation's #1 overall 2022 prospect, Dream City Christian's 6-foot-5 senior Shaedon Sharpe, electing to sign with the University of Kentucky, and making a decision to enroll early at Kentucky and red-shirt at the program during the spring of 2022.

Sharpe had been mulling over this option for some time, and now has decided to end his high school career, and will not play for the remainder of his senior season. It was very noticeable on Saturday evening, as the biggest game of the year unfolded between #1 ranked AZ Compass Prep, and a very good and deep Dream City Christian Prep team during The Grind Session's Latitude Longitude Classic this weekend held at AZ Compass Prep. Sharpe was not in uniform for the exciting match-up, as AZ Compass would win a nail-biter, 69-68, on a buzzer-beater three-pointer by AZ Compass Prep's 5-star 2023 guard prospect Kylan Boswell. The Dream City Christian Prep is as good as any prep program in America this season, and they proved it Saturday night against top-ranked AZ Compass Prep. Even without the amazing services of the nation's premier 2022 prospect, Shaedon Sharpe, Dream City narrowly missed an opportunity to knock off the nation's top team - proving just how talented and deep they are this season.

Sharpe has announced that he's graduating early and will red-shirt in the second semester of the 2021-22 season at Kentucky. While the plan is to enroll early and train with the team for the second semester, Sharpe won't be eligible to play until the 2022-23 season. Sharpe plans on playing college basketball for the 2022-23 season, but there are still questions surrounding his NBA draft eligibility.  He is a fifth-year senior in high school at Dream City Christian (Arizona) and will turn 19 in May 2022, which will make him eligible for the draft. It's up to the NBA whether or not it honors his graduation date of December 2021 or considers him one year removed from high school since he's a fifth-year student. Sharpe will join fellow Arizona star product Ty Ty Washington at Kentucky during the spring.

"I just want to take in all the info that Coach Cal (John Calipari) gives his players and get better every day," Sharpe told Yahoo Sports. "I've seen what he's done with Devin Booker (Phoenix Suns), and all those other guys, so I'm just looking forward to learning as much as I can."

While Sharpe would sign his national letter of intent with Kentucky, many other boy's and girls basketball prospects have also highlighted Arizona's early NCAA Fall Signing Period - signing national letters of intent. The majority of top prospects in the 2022 Class will ultimately sign during the late, NCAA Spring Signing Period, which will begin April 13th and run through to May 18th. This period is known by the NCAA as the "Regular Period," as this is when the majority of prospects will make their respective college decisions. However, some of the top overall prospects in the class have made their decisions early, simply because many of these prospects were recruited harder going into the fall signing period. The majority of senior prospects do not see their recruitment kick-start until their senior seasons.

Here is a list of Arizona prospects that have already signed since the beginning of the period on Wednesday . . .