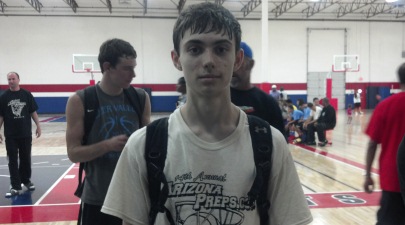 On October 26th at Inspire Courts in Gilbert, the play on the courts didn’t let anyone down.  The talent level of the players in the massive facility was the highest in the state this year.  There were 120 boys competing on 12 teams along with the 2 best players in state – Dobson’s Jaron Hopkins and Mesa Mountain View’s Payton Dastrup.

After watching 3 games by each player, here were the top 40 High School players on how well they performed plus one 8th grader – picking up with the top prospects in the 2014 senior class …

Will Goff  CG 6’2” Desert Mountain HS - Will is your classic combo guard where he can initiate the offense and score some buckets as well.  He has a nice shot out to the 3-point line and is a deadly mid-range shooter.  His release is quick and he gets high off the floor.  He is left-handed, but drives right sometimes to be more versatile.  He is strong enough to handle some contact to take the ball to the rim for a lay-up.  When he is the PG, he is very conservative and almost never turns the ball over.  He won’t ever be careless with the ball, which is a great skill to have.  He struggles a tad with the true PG speed burners, but he is an excellent defender on the wing and stays with his man well and also gets up in their grill.  He has the look of a low major prospect.

Brandon Williams  PG  5’10” Paradise Valley HS - Brandon is a pass-first PG with great speed and an elite defender.  He always is trying to set up his teammates and make the correct play on offense. This lefty has shooting range out to the 3-point stripe, but right now at this stage of his career, he will need to be more consistent.  His best shot is probably from the elbow right now.  His stroke does look good though when it leaves his hands, so over time he will improve.  He is the kind of hard worker that will one day make his weakness into his strength.  When he plays defense on the ball, he harasses PG’s all the way down the court and uses his elite quickness and great lateral movement to make it hard for any PG to get what they want.  He has a nice frame on his body to battle with bigger guards and never backs down to a challenge.  He seems like a low major to D-II type of prospect.

Jorge Cano  SF 6’5” Maryvale HS - Jorge is another player that I have never heard of that played real well and announced himself as a player to watch.  It looks like he has some more room to grow, as he has a nice wingspan and is still fairly skinny.  He is a good shooter from 15 feet and in.  He also is extremely quick and has some nice bounce in his step.  He threw down a few dunks in the 3 games and also has nice footwork down low in the paint.  Since he is very quick for his size, he is able to give a shot-fake and go by his man for a dunk.  He also has an array of pump fakes in the paint and can do some up-and-under moves.  He is solid on defense and can grab rebounds at a high rate with his athleticism.  He is on the borderline of a low major type of player depending if he grows some more.

Remy Smith  SG  6’3” Desert Mountain HS - Remy is one of the better shooters in his class who has some bounce and a good feel for basketball.  He is one of the elite catch-and–shoot type of players with a fast trigger.  He can shoot it from deep or mid-range.  It also seems like he will never miss a shot, since his form is flawless.  He squares up to the basket and has his hand under the ball perfectly every time.  He also can find the open man with his high IQ and court awareness.  Sometimes you feel he should shoot more at times, but he is an unselfish player trying to do the right thing.  He will need to get stronger and improve a tad on defense for the next level.  A real nice kid off the court that just loves the game of basketball.  He should be a D-II prospect down the road.

Keaton Ranger  SG  6’2” Gilbert Christian HS - Keaton is another player that most people don’t know much about, since he hasn’t played HS ball yet, just during AAU/club season.  He is a SG, but he can basically do everything with the ball and play all positions on the court besides center.  He is an extremely long player with a 6’6” wingspan that defends well on the ball and can block some shots when he helps.  He is a very good rebounder for a guard and can throw his body down low to make some tough plays in the paint. He is a very good shooter from mid-range to the 3pt stripe.  He has real good vision and can handle the PG job at times with ease.  He glides around the floor with his long arms and long strides to make a play for himself or others.  He will have to bulk up and put on some weight for the next level.  He is a D-II type of player.

Trevor Johnson  CG 6’1” Flagstaff HS - Trevor is yet another player that I have never heard of that shined on Saturday.  Trevor is real athletic and quick with a nice shooting touch.  He hit many 3-point shots on the day, along with some mid-range jumpers.  He is real special in the open court as he flies around with the ball in his hands to blow-by his defenders to score the ball. He can set his teammates up well, but he will have to improve in this skill for the next level to become more versatile of a player, since he is only 6’1”.  He also has good length to defend other guards and good lateral quickness to stay with them, as he had a bunch of steals in the 3 games.  Trevor will be a solid D-II prospect for the next level.

Mark Olsen  PF 6’7”  Mesa Mountain View HS - Mark was a late add to the event and played in just 1 game, but I felt I had to mention him at 6’7” with a real strong build and sturdy frame.  He has good fundamentals down low in the paint and is a real good rebounder.  He made all the easy plays that he had to and didn’t do anything unnecessary.  He played within the offense and never forced any bad shots or plays.  He seemed like a very good team player and will sacrifice his glory for the team’s success.  He crashed the boards well on offense and defense, and passed it out to the guards.  It seems he knows his role and excels in it.  He should find himself on the radar among D-II coaches.

Legend Artis  PF 6’5” Campo Verde HS - Legend is a long player that has a nice mid-range shot with huge hands.  He can palm a ball and throw it down fairly easily.  He has a reportedly 6’10” wingspan.  His body is already started to fill out, so he might not grow much more, if at all.  He is very strong though to bang in the paint against bigger players.  He has some post moves in the paint, but usually prefers to shoot the elbow-shot.  He also is a very good shot blocker if you come in his area.  Legend also has underrated handles for a big man, as he can sometimes take the ball off the glass and go coast-to-coast.  He should be a D-II prospect.

Marco Morales  CG 6’0” Chandler HS - Marco is also one of the best shooters in the class with the fastest release in the gym.  He has mad range on his 3’s with slick handles and solid vision with his passes.  He can cross defenders right in front of them and go by with ease.  He also is very confident and with a swagger in his abilities to perform at a high level - whomever is guarding him.  He is fun to watch, since he can rattle off 2-4 3pt shots in a row. He will have to get stronger and put on more weight to play at the next level to defend bigger, stronger guards - but is an intriguing prospect.  He will likely play at a Juco college in 2 years.

Gilbert Pinkney  PF 6’4” Buena HS - Gilbert is your classic garbage-man PF.  He does all the dirty work in the paint, on the floor and hustles for everything to help his team out.  He doesn’t have much skill level at this point in his career, yet he is an asset to a team.  He is extremely strong and can push out a bigger player to get off their sweet spot in the post - making it difficult for a player to score.  You wouldn’t run a play for him, but he will get his shots off of loose balls, tip-ins and offensive rebound/put-backs for lay-ups.  Gilbert will definitely find a place in college in 2 years.