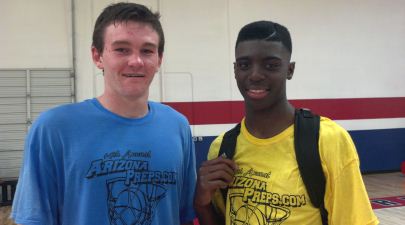 On October 26th at Inspire Courts in Gilbert, the play on the courts didn’t let anyone down.  The talent level of the players in the massive facility was the highest in the state this year.  There were 120 boys competing on 12 teams along with the 2 best players in state – Dobson’s Jaron Hopkins and Mesa Mountain View’s Payton Dastrup.

After watching 3 games by each player, here were the top 40 High School players on how well they performed plus one 8th grader – picking up with the top prospects in the 2014 senior class …

Payton Dastrup  C  6’10” Mesa Mountain View HS - Payton is one of those special bigs that don’t come around very often.  He has a rare blend of size, skill, athleticism and IQ.  He also is a great kid on and off the court, as he respects the game and his teammates to the fullest.  The first thing you realize is he is an extremely good rebounder in his area due to his terrific hands.  He never lost a rebound to anyone in 3 games that he should have got.  He also has a feathery shot out to the 3-point line, but seems to love the elbow shot the best.  Once he gets in the post, he can do many things since he can handle the ball with either hand and can finish with both hands as well.  He also hustles up the court and tries to beat his man to get good position.  He also can be a huge asset in the pick-and-pop game on the next level.  The interesting thing about Payton is he is more athletic then people realize.  He had some thunderous dunks on the run like Tom Chambers used to do way back when. He will never be an elite shot-blocker, but good enough to hold his own. Payton is the best big man from AZ since Channing Frye (Phoenix Suns-NBA).

Zylan Cheatham SF 6’8” Westwind Prep - Zylan, as the kids say, is a “freak”.  He has NBA athleticism, length, speed and size.  He can “jump out of the gym.”  He won the annual dunk contest hands down.  He also can handle the ball real well like a guard and blow by basically anyone he wants to at will. Once he crosses you over, he can finish strong at the basket with a lay-up or an incredible dunk.  He also understands if he has a big on him, he should blow-by them immediately.  He also is a very good passer, as he found his teammates cutting to the basket many times to show that he isn’t selfish. When he shoots, it seems that his range is a tad limited, but he can make outside shots about 12 feet and in.  He will have to extend his range over the next 2 years to be even more dangerous offensively.  Since he has amazing length and quickness, he is a very good defender on the ball and can provide great help-side defense in the paint and block some shots.  Zylan’s upside is off the charts, and, as he produces more, his stock will go through the roof.  Zylan is a high-major caliber player.

Elston Jones C 6’9” Millenium HS - Elston is an extremely, highly skilled below-the-rim player. This lefty can put the ball on the floor a tad and use his girth to create space and finish very efficiently in the paint.  He also has soft hands to catch passes in traffic and finish off his lay-ups.  He has shooting range out to 15 feet and has very nice form on his release.  He also is very patient on offense, as he never rushes the play.  He surveys the scene and then makes his move.  He also is a good teammate and very easy to coach.  He is a yes sir, no sir kind of kid.  He is a good rebounder and solid defender in the paint.  He just came off an injury, so he will have to get in ideal shape for the season.  Elston has very good upside still and I’m guessing he finds a spot in a high major to mid-major at worst.

Rolando Rhymes PG 5’10” Desert Mountain HS - With all the elite big men at the event, Rolando stole the show.  He also stole many balls in the process too and then went down the other end and assisted it to a teammate running the court.  He is the purest PG you will find in Arizona.  A pure teammate that will always try to find his player's shots first and then will score when the team needs him to score.  The ball is on a string for him and he has an amazing fast crossover.  His speed is unmatched by anyone in the state and he uses it well to push the ball up the court.  He can break you down in the half-court set and blow-by you with his right or left hand.  He finishes lay-ups with either hand and has an improving mid-range jump shot.  He will need to extend his range a tad, but this burner had national scouts talking about a Darren Collison clone.  He will probably be a mid-major get.

Connor MacDougall C 6’9” Westwind Prep (Arizona State commit) - Connor has very good fundamentals with a strong body and very good handles.  He also can shoot from 15 feet and in, but usually likes to stay inside the paint and do his damage.  It looks like his favorite move is his jump hook. He can make this shot straight on or off the glass.  He can grab rebounds and start the break himself, with his deceptive handles for a big man.  He has a college-ready body to mix it up with any big man in the country.  He’s not a high-riser, but he is a solid athlete for a big man.  His defense is ok, but works hard and is trying to continue to improve.  Connor is also a quality person off the court.  He will be attending ASU in 2 years.

Jake Toolson SG 6’7” Highland HS - Jake, is a tall strong guard who has deep range on his shot.  He is an underrated athlete who can finish his lay-ups fairly easily.  He also is a tough kid on defense who can block some shots and doesn’t mind taking charges.  He is a very good rebounder for a guard and likes going in the paint and mixing it up with the bigs.  His shot selection will have to improve and he needs to use his teammates a little more moving forward, but the great thing about him is he can create space from his defender and rise up and fire. Jake looks to be a mid-major player.

Chaz Mack PF 6’6” Catalina Foothills HS - Chaz is a coaches’ dream that outworks every player on the court with immense energy.  His motor is always going - to the point where he could get annoying.  In only 3 games, Chaz accumulated 9 offensive rebounds.  Chaz also has a good shot out to 15 feet.  He can handle the ball well enough to get by his man with a shot-fake to go by for a lay-up.  He grabs rebounds in traffic and keeps the ball high, so he can finish the tough shots in the paint.  If he continues to grow and develop more skill level over the next 2 years, he could find himself as a mid to low major prospect.

Ryan Richardson SG 6’5” Dobson HS - Ryan is a long, skilled SG who can score on all 3 levels.  He can take the ball to the hole with his solid handle and lay it in or use some nice floaters.  He has a beautiful stroke out to the 3-point stripe, and he is a premier mid-range shooter.  He has a soft shot with no wasted movement and has a quick release.   Since he is long, he can play the passing lanes and get some steals with some lazy passes in his area.  He is a solid defensive-rebounder for a guard, who is not afraid to get dirty in the paint.  To continue his progression, he will need to move without the ball to find some cheap points on cuts or offensive tip-ins with his size.  He still has a lot of upside left and one of my personal sleepers in the class.  He should land in the mid majors or better when he plays in college.

Tate De Laveaga CG 6’2” Westwind Prep - Tate was a surprise for me since I saw him last time over 2 years ago.  He has improved immensely.  He has a great feel for the game with a high IQ and great court awareness.  He is an extremely athletic scoring point guard with great vision.  He had some of the nicest passes on the day to finish with 6 assists in only 2 games of play.  He has unlimited 3-point range on his shot and is a very good defender, due to his natural quickness and aggressiveness.  His shot is a tad low on his release, but he normally gets the job done.  He seems like a vocal team leader on the court, which is nice to see.  Tate will probably end up at a mid major program.