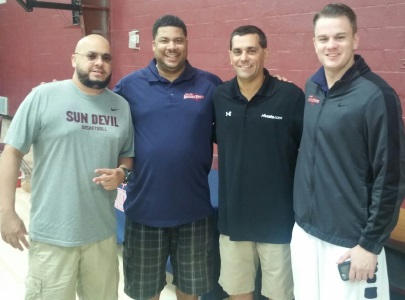 The  18th Annual Arizona Preps Fall Showcase, Arizona’s original showcase basketball event, was held this past weekend on the campus of American Indian Indian College (SAGU University).  The event was held on Saturday and Sunday for high school and junior high aged boys.  This year's historic event went back to a multiple day format, adding skill and drill work and also spoofing up the guest speakers in the event.  Once again, the event also included some of the top scouts in the business - creating amazing potential scholarship opportunities for each player involved.

This year's Fall Showcase event included each of the top scouts / writers in the state, and also very influential, top-rated national scout Jerry Mullens.  Mullens was in attendance for this year's event and watched each of the prospects in action - something any desiring top prospect in the country would pay for.  Mullens' monthly scouting report is subscribed to by more than 300 divsion-I colleges.

Mullens has become a very good friend to the Arizona Preps staff, and we appreciate him a great deal.  We look forward to working more closely with Jerry during next year's Arizona Preps Spring Classic.

The event also included top-rated writers Gregg Rosenberg (Rivals.com), Chad Groth (Area Codes Basketball), Ron Coleman (Southwest Showcase & Rivals.com), Dee Coleman, many other writers from the Arizona Preps Staff and numerous college coaches.  With so many different elements of the recruiting process in place for this year's event, participants of the Fall Showcase benefited from this weekend's activities.

Throw in the terrific speakers of this year's event, Eddie Johnson of the Phoenix Suns, Tom Kuyper (Grand Canyon University color analyst) and John Saintignon (Former Oregon State University assistant coach), and each of the campers were given something they could take with them for the rest of their lives.

Next year's Arizona Preps Spring Classic (in March) will be a much bigger and better event, so do not miss out on the next opportunity to raise your understanding of the recruiting process and boost your overall exposure to scouts and media.