Eye Of The Tiger, Salpointe Catholic

Eye Of The Tiger 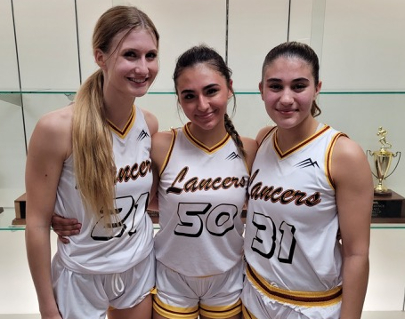 On March 20, 2021 the Salpointe Catholic Lady Lancers lost a heart-breaker to the Seton Catholic Lady Sentinels, 62-70, in the 2021 AIA 4A State Championship Game. I remember walking up to get a photo of 2022 Guard Kylee Callahan and 2023 Guard Bria Medina, as their individual performances stood out. Both guards played their hearts out by applying pressure on the defensive end, diving for loose basketballs and just playing with passion. The look in their eyes really brought back memories of my playing days.

I didn’t see sadness, moreover frustration of how close they were to winning a state championship, yet falling four baskets short, but, more importantly, I saw the eye of the tiger. That fire in their eyes burned bright in the off-season. Coach Joe Luevano brought his team to the 1st Annual Arizona Preps Summer Clash last summer, which is an elite girl's event to begin June Ball.

It seemed that Coach Luevano’s team did not take any time off after coming up short in the championship game. His team looked like they played with a chip on their shoulder, as if everyone was sleeping on the caliber of his team. They won the championship at the Summer Clash over a very talented Gilbert team.

Winning that event helped propel his team to a very successful summer. Besides returning an elite backcourt in Callahan, Medina, and 2022 wing Tessa Hastings, the Lady Lancers added incoming Freshmen 2025 forwards Taliyah Henderson and Hannah Williams. Henderson and Williams added another dimension to the current rotation, as both girls come up big on the glass and the defensive end.

Another key contributor is 2025 combo-guard Jolee Nelson. Nelson added depth at the guard position and is a fantastic athlete who is lightning quick and possesses great defensive attributes. The next time I would see the Lancers was at the 23rd Annual Arizona Preps Fall Showcase. Coach Luevano requested tough competition and drew a match-up with National Powerhouse PHH Prep. The contest seemed close in the opening quarter, but the depth of PHH Prep propelled the Lady Fire to a victory over the Lady Lancers.

In talking to Coach Luevano after the Showcase, he was grateful for the opportunity to play tougher teams in the off-season to get his squad ready for the 2022 season. The result of the tough off-season was a dominant 22-3 overall record with a 22-0 record against other Arizona High Schools and the 4A State Title Championship.

The Lady Lancers looked impressive in all the games I watched, as their team is loaded with college prospects. College coaches need to get involved, as it seems that Salpointe produces big-time talent.

A 5-foot-8 combo-guard who has elite leadership qualities. She averaged 16.3 points, 3.1 assists, 4.8 rebounds and 3.3 steals per/game. An offensive architect with elite ball handling ability and can facilitate well. She is a three-level scorer that competes hard on both ends. She is receiving a ton of interest and has offers from smaller colleges, which would be a steal, as I believe she is one of the top sleeper prospects in the state that can compete at a very high level.

A 5-foot-11 wing who has impressive athletic ability. She utilizes her length, quickness and anticipation to disrupt passing lanes and opponents offensive rhythm. It seemed as the season went on, Hastings kept making a deeper impact on games. Her performance was the X-Factor in the Final Four win over defending state champion Seton Catholic. She finished the season averaging 9.1 points, 2.2 rebounds, 2 assists, 2.3 steals and 1 block per/game. She is another prospect who has been receiving a lot of offers from smaller colleges. I believe she can make a huge impact for a college program.

A 5-foot-8 point guard who is defensive minded. She plays very aggressively on both ends of the floor and possesses great athletic ability. She is a three-level scorer and can be a match-up nightmare for opposing teams, as she is crafty with her offensive and defensive abilities. She finished the season averaging 9 points, 3 assists, 2.3 rebounds and 3.2 steals per/game. My observations of her against D-I talent is that she can flat out GO!  She is another sleeper prospect in the 2023 class with a bunch of interests from colleges. I feel she is at least a mid-major prospect, as she has the talent, work ethic and tools to compete at that level. College coaches get involved!

A 6-foot-2 guard-forward who can do it all. She has a high IQ and unique skill-set, as she can play all five positions. Her size and athleticism cause match-up nightmares for opposing coaches. As a mere freshman, she averaged 11.4 points, 5 rebounds and 2 steals per/game. She is extremely skilled, as she defends well and is a three-level scorer. She currently has (2) Division-I offers and I expect her to have a bunch more offers to follow, as I project her as a high-major prospect.