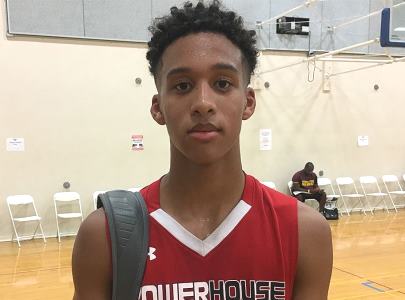 One of the elite prospects in Arizona's 2020 Class has been considered as one of the elite prospects in the class for some time, since entering the high school ranks. As a result, Salpointe Catholic High School's 6-foot-2, 155-pound senior point guard prospect Evan Nelson saw his college recruitment take off early in the recruiting process when he received his first division-I offer as a mere freshman. Currently, Nelson has received a long list of college offers to his credit, and he continues to pick up recruiting steam with strong performances this spring and summer.

As a result, Nelson has become one of the more sought after recruiting targets from the point guard position in the West throughout his high school career.

It will be very interesting to see where Nelson ultimately lands at for college, since he has such a long list of offers for himself, and also such a wide variety of schools to choose from. Nelson has not currently indicated a leader in his college recruitment at this point, and with a fall decision on the horizon, things should speed up in his recruitment fairly soon.

True point guard prospects are a commodity for college coaches, when needed, and Nelson is a floor general with the basketball in his hands, and also can score the basketball at a high clip as well. Nelson is a slick ball handler and passer with a knack for scoring the basketball and making plays off the dribble for himself and others.  Nelson has a nice ability to score the basketball at a nice clip, with a good shooting stroke with range, which makes him difficult to defend and slow down for opposing guards. He is quick off the dribble and can get into the lane and make plays in traffic - finishing at the rim or finding open cutters to the basket. Nelson puts pressure on the defense as well as any guard in the class, and is able to make plays for himself or his teammates, a valuable assset to his team.

After a strong performance this spring, while traveling with his Powerhouse Hoops 17U team, Nelson has continued his strong play this summer as well, and will finish the busy recruiting month of July with his program. While he does not need more offers at this point, Nelson could gain more recruitment from bigger schools before the fall. It will be difficult for him this week though, as college coaches will only be certified to attend NCAA Basketball Academys throughout the country this week, and Nelson will not be in participation. Instead, Nelson, and many other elite performers like him, will be playing in other events this week.

Nelson though is setting himself up for a big senior season where he will lead a very talented Salpointe team next season, that is widely being regarded as one of the favorites to win the 4A State Title next season. After an impressive 27-3 overall record last season in the state, Nelson returns as a senior to lead a focused group of players that have almost won it all the last two seasons. This could be the year for a Salpointe team that really enjoys playing together.

As a junior, Nelson put up impressive numbers - averaging 19.3 points, 4.7 rebounds and 4.2 assists per/game. While his numbers have been terrific throughout his high school career, Nelson should become one of the state's premier scorers and assist-men as a senior.

I will continue to monitor Nelson's recruitment closely this summer and fall, as he nears his college decision, and prepares himself for a big senior season, in what should become his best season to date.

Arizona Hoop Review Scouting Report: Nelson is a very good looking guard prospect with good size for the point guard position.  He is a nice scorer, but also knows how to run a team effectively.  A good shooter with range, and can stop on a dime and make shots from mid-range with defenders draped all over him.  A good penetrator and finisher in traffic.  Has quick hands and feet defensively, and applies strong defensive pressure on opposing guards.  Plays bigger than his size.  An active rebounder from the point guard position.  A very good passer that sees the floor and pushes the basketball up the floor.  Good in the open floor and makes plays for his team in transition. A good overall point guard prospect that is also capable of playing both guard positions as needed.