Emari Jones Making Noise For Himself 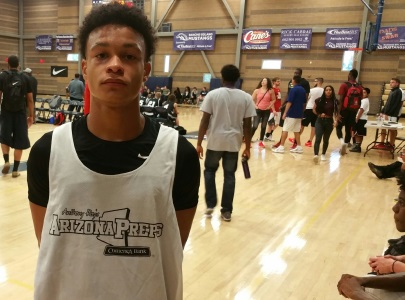 One of the top prospects in Arizona's 2019 class is Desert Edge High School's 5-foot-10 sophomore guard Emari Jones.  After recently moving to the state of Arizona from Indiana, Jones has played well recently in several events, and has caught my attention as one of the better prospects for the future in this state.

The son of former University of Indiana star guard Jay Edwards, Jones has excellent bloodlines for the game of basketball.  Edwards was a McDonald's All-American and tremendous overall basketball talent in hsi playing career.  With those bloodlines and also coming from the rich basketball state of Indiana, Jones has the physical and mental tools to become a terrific prospect over time.

I watched Jones perform recently in this year's Arizona Spring Showcase and also in this year's recent Arizona Preps Spring Classic.  Jones was among the top overall performers in both events, and impressed me with his electric play and ability to score the basketball at all three levels.  He plays inspired basketball and makes up for his lack of size with excellent athleticism and quickness.

While small in stature and size, Jones is a high-scoring point guard prospect that is capable of playing both guard positions on the floor, but will need to become a point guard exclusively due to his lack of physical size.  It will be very interesting to see how much he continues to grow physically over the next couple years.

Jones can score with the best of them though, and he is difficult to keep out of the lane, where he is a very good finisher.  He is very explosive for his size.  His best attribute though will be in his ability to become a lock-down defender.  He has the lateral quickness and anticipation to put a lot of defensive pressure on opposing offenses.

New the state of Arizona this high school season, Jones averaged 8 points, 2.5 rebounds and 2.9 assists per/game this season for a Desert Edge program that finished with a losing 7-14 record on the season.  Under the strong leadership of head coach Scott Lovely, I look for this team to be much better next high school season.

Jones is quickly becoming one of elite guard prospects in Arizona's 2019 class, and will now look to make a nice intro into our next player rankings for the class.

I will be keeping a very close eye on this young man over the next couple years, and will look to follow his play this spring and summer.  Jones will play for Vernon Holmes and his Dream Team club program.