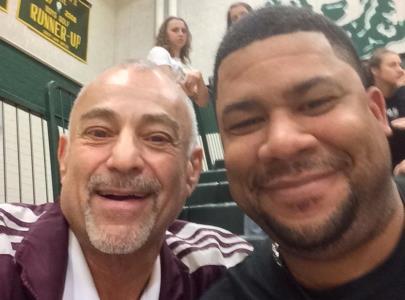 Arizona's basketball culture has changed a lot over the years, and has developed a great deal over time, but one man that helped to develop the culture many years ago was basketball aficionado Eliiott Glabman.  Glabman helped to develop the club basketball culture in the state by forming the Arizona Heat basketball program in 1992.  The program helped raise the overall level of exposure in the state of Arizona, and as a result, Glabman is known as one of the true Godfathers of Arizona basketball.  Today, Glabman continues to make strides for the sport in the state and has a new venture that will also help to improve the overall level of recruitment in the state.

A lot has changed since Glabman first began, as he first got started in the late 1980's after he decided to create a team for his son. He developed a team called No Pain, No Gain, before eventually joining forces with another visionary in the state, Art Dye, as the two legendary figures decided to work together - forming the Arizona Stars organization.  Soon after joining forces, the two decided to part ways after having differences and Glabman decided to develop the Arizona Heat program.  Soon after, the Stars and the Heat became Arizona's top two programs in the state and competed hard with one another for many years, but creating many scholarship opportunities for Arizona's best talent in the process.

It was a different time then, of course, as the Stars and the Heat were the only two programs in existence, and, as a result, the two programs were loaded with the state's best talent.  While the Stars would eventually land a major Nike deal, the only Nike deal to this day in the state of Arizona, the Heat would wear the Adidas brand - a direct competitor of the Stars organization.

"Our focus was to help kids that were good academically and on the basketball court," said Glabman.  "Kids had to have a 2.5 GPA or better to play for the Heat."

Glabman expressed to me that he actually turned down NBA veteran Richard Jefferson for his program, as a result of Jefferson's poor academic performance.

"I told him to get his grades up first, then come back when he had improved his grades," said Glabman.

Jefferson, of course, went on to have a storied career with the Arizona Stars, while Glabman instead moved forward with lesser talent but with good academics.  Glabman and the Heat would soon become one of the better programs in the West and help much of the state's top talent gain maximum exposure to college programs across the country.

"I did it for the love of the game," said Glabman.  "I wanted to Help Arizona kids land scholarships."

Glabman and the Heat became an alternative to the Stars, and their first top prospect was former NBA guard Gerald Brown, who would eventually sign with Pepperdine University and get an opportunity to play in the NBA, where he saw a short stint with the Phoenix Suns.

Glabman attended 150 to 160 high school games per high school season, as he scoured the state for top basketball talent to fill his teams annually.  Glabman coached the Heat with tireless passion each year and taught his players hard work and dedication to the sport through a level of commitment that improved the overall state's level of play.  Glabman and his long list of high school coaches worked hard to develop the players they worked with and had many successful prospects that would move on to the collegiate ranks.  Annually, top prospects in the state either came from the Stars or the Heat annually, as Glabman consistently saw his teams place very well in regional and national events.

Glabman eventually would have to walk away from the Heat organization, after suffering numerous back surgeries, which caused him to have to hang up his coaching duties in the mid 2000's.  By the time Glabman had finished coaching and operating the Arizona Heat, Glabman had produced 393 college scholarships for his players - an amazing accomplishment for him and the Heat program.

I sat with Glabman and discussed many of his accomplishments with the Heat while I interviewed him for this story, and as someone that also walked away from club program, I asked Glabman how much he missed it.  First, Glabman could not go into detail about his love for his program and the void that he had in his life without the Heat, but later in the evening, Glabman became very emotional, as he cried and informed me just how much he missed the days of running the Heat.

I felt the sadness and extreme emotion of Glabman, who now still finds time to sit in basketball gyms around the state, but today things are very different for him, as very few players and coaches actually know who he is.  Gone are the days when Glabman would walk into a gym and many of the top prospects on the court actually played for him.  Today, he is almost unknown as he enters gymnasiums, but the love for the game and the players has not changed for him.

Instead today, with so many different club programs now in the state, Glabman has focused and turned his attention to helping Arizona prospects get recruited by college programs - something the state needs more of than anything else.  Glabman has started Field Level Recruiting www.fieldlevel.com

"It is amazing for Arizona players," said Glabman.  "Our state needs this more than they do club teams.  This is a great way for me to stay involved in the game and help Arizona players."

Glabman has become one of the top producers of basketball prospects for the Field Level website, and has been very successful in a short period of time at helping Arizona top high school and junior college prospects improving their college recruitment.  Last season, Glabman helped Chandler-Gilbert JC prospect Derek Fulner-Dantzler land a division-I scholarship offer at the end of the season, after the sophomore wing was well under recruited.  He hopes to continue and build on this success this season and in the future.

While I have been called the "Grandfather" of Arizona basketball by many people over the years, Glabman is a true nominee for that title, along with several others - Art Dye and Gene Alby.  He personally changed the game for the better almost 30 years ago, and, while he has definitely slowed down due to injuries and health reasons, he has not slowed down in his love and passion for the sport or helping Arizona's basketball talent go to another level.  A visionary in the state, Glabman has not received much for his extreme contributions to the sport.  Instead he has worked tirelessly  over the years with very little coming in return for his many years of service in the state.

"I never did it for anything other than seeing these young get opportunities," said Glabman.  "I just love it.  There are too many people today doing it for the wrong reasons.  The state of Arizona is in a bad place today.  Hopefully I can bring some life to the state with something each of these players really need."

Thank you Elliott for all that you have done for our state over the years.  I am truly thankful for the vision that you had to raise the level of basketball in the state many years ago, and understand just how much better the state's basketball culture is today, as a result of your tremendous accomplishments and contributions to the state.  Glabman has a tremendous heart and passion for life and helping others, and he provided that same love and passion for his players.  Glabman not only coached at a high level for each of his teams and players, but he also worked tirelessly when not coaching - calling college coaches and working the gym every chance he got to advise anyone that would listen about the performances of his players.  And not only about the play on the court of his players, but their accomplishments off the court, in the classroom.

Today, as Glabman transitions to his new venture with Field Level, I know that he will work just as hard to bring something to the state that we really need - recruitment.