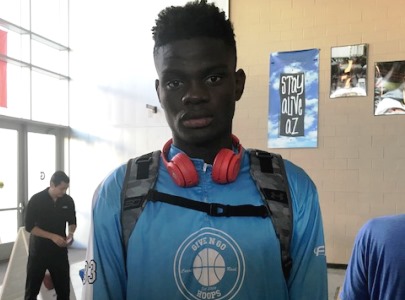 The state of Arizona is already loaded with some top-rated national talent at all classes for college coaches to take a hard look at.  Now another national prospect has emerged in the state, as elite 6-foot-9 incoming freshman prospect Sadraque Nganga has landed in Arizona and will pick up his career at AZ Compass Prep in Chandler, Arizona.  Nganga has already received rave reviews internationally, and now he should become one of the most sought after recruiting targets in the nation's 2022 class of prospects.

I first caught my glimpse of Nganga earlier this year while he was playing in the HoopHall West event in Phoenix in December.  Nganga played for the Give N' Go Hoops program and was terrific - leading the team to the tournament championship, while playing in front of several members of shoe companies.  The consensus after the event, was that Nganga was a top-5 national prospect in the 2022 class, if not the best player in America for the class.  Because Nganga had not yet played against other top-rated prospects in the class, it remains to be seen, now that he is in America long term, just how high he will be regarded by national scouts and media.

At his tremendous size and athleticism, and ability to make plays for himself and others off the dribble, Nganga is a big-time talent that should immediately become the nation's top prospect - based on what I have seen up to this point nationally.  Sadraque Nganga is a very rare find at his size and skill level, and while he does not yet speak english, he is a rare talent that will only get better and begin to dominate his age group.

Sadraque, after just arriving to the states recently, competed with the heavily Nike-sponsored Las Vegas Prospects in last weekend's Nike Peach Jam for their 16U team.  Nganga played very well against American competition, and for a team that he did not even know yet.  He should continue to travel with the Prospects for the remainder of this July.

It is still too early to go much more in depth about Nganga as a player, and I look forward to watching him perform this July, to gain a much better feel for him as a player and as a college prospect.  Either way, look for him to garner much recruiting attention and national media fanfare as individuals in the basketball community begin to become aware of his emergence.

Arizona prep schools continue to raise the level of basketball in the state of Arizona, and the emergence of Sadraque Nganga has done it again.