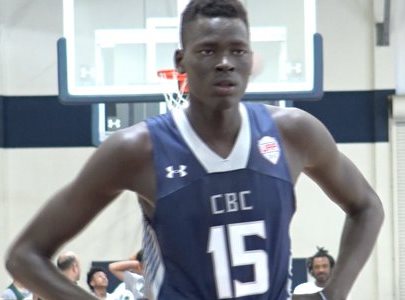 The state of Arizona 's level of basketball talent has risen to completely another level over the past year and now it will be the best it has ever been.  It has been confirmed by the AZ Compass Prep coaching staff that the nation's former #1 ranked national prospect, 7-foot-3 senior post Chol Marial, will land at one of the nation's fastest rising prep programs, AZ Compass Prep.

Compass Prep's basketball program has been on the rise over the past year.  After last year when former star guard Both Gach (University of Utah signee) and Milwaukee transfer Dwayne Walker (Chipola Junior College signee (FL) helped the developing basketball program gain national attention, the school is continually making major strides by day in it's second season.

The program is led former NBA/Euro Pro guard Ray Weathers and his wife Angela Weathers, a top-rated Southwest Region trainer, and growing team of professionals with the addition of other assistants on the staff, including former NBA Lottery pick Sharon Wright, the school received a major injection as a whole, and so will the state of Arizona's level of competition and notoriety this season, with the emergence of players like Chol Marial.

Chol was once regarded as the nation's top overall 2019 prospect and a definite future NBA Lottery pick, after quickly emerging on the national basketball scene as a mere 8th grader.  Marial has been one of the nation's premier prospects for some time, but he has had nagging injuries over the past couple years, causing him to miss a lot of action on the basketball court.  A native of Sudan, Chol spent last season at IMG Academy in Florida, after spending two seasons at Chesire Academy in Connecticut.

Chol will return to action this season at AZ Compass and anchor a loaded team that will also feature numerous other top-rated national prospects, including elite 6-foot-9 incoming freshman prospect Sadraque Nganga who recently landed in Arizona from Angola, and has recently gained serious national recruiting attention.  Nganga has been regarded also as a future NBA draft prospect as well, and recently gained national attention at the CP3 Camp held in California.

Chol will look to lead a talented group of prospects and regain the form that made him a future top-rated NBA draft pick.

"He will be playing with a chip on his shoulder this season," said head coach Ray Weathers regarding Marial Chol.

Chol has been recruited by every top college program in the country but currently reports offers from West Virginia, Florida State, Georgetown, St. John's, Wake Forest, Iowa, SMU, Rutgers, Portland and Central Florida.  Chol has received loads of recruiting interest also from such schools as Kansas, Kentucky, Arizona, UCLA, North Carolina, and many others.  He does not currently list any leaders in his current college recruitment, and it is still unknown as to whether Chol will even go to college after his senior season.  Chol could make the jump straight to the NBA if there is a future rule change to NBA eligibility requirements.

The move to Compass Prep will be a good one for Chol, as he has family in the state of Arizona, and will be under the leadership of Angela Weathers, who has developed one of the nation's premier academic programs for athletes, Training Up A Champion (TUAC).  The program has gained national attention by the NBA and other outlets, and is a major part of the Skyline Education program across the state, which includes several different high school programs, including Skyline Prep, the state's returning two-time defending state champion in the Canyon Athletic Association (CAA).

Assistant coach Pete Caffey was instrumental in bringing Chol to the school.  Caffey has a close relationship to Chol and has worked out Chol for several years.  Chol being close to Caffey could also aid in the overall health and development of him as a player.

I will continue to follow this story as it continues to unfold, and bring you any updates as they develop.