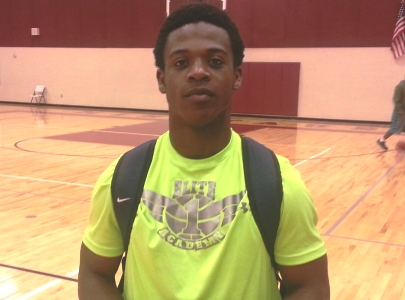 Elite 1 Academy is a newer prep school located west of Phoenix.  Quickly emerging as a top-rated program in the valley under the leadership of Tamika Goree - a hard-working female focused on raising the level of basketball in Arizona.  Elite 1 Academy has developed rapidly into a serious basketball program for aspiring college basketball prospects.

Here are my player evaluations of some of the top prospects from the program (in no particular order) . . .

- Goodman is the program's top unsigned prospect in the 2015 class.  He is a nice-looking 2/3 prospect with good athleticism and a nice shooting stroke.  He has good range on his shot and also possesses a quality mid-range game.  Good man has a good body with size, and good overall maturity.  A good slasher and open court player.  A solid mid-major prospect this spring.

- Frimpong (pictured) is a very strong and well-built physical point guard prospect.  A strong handler of the basketball and a very good finisher over bigger defenders in the paint, Felix runs a team very well and is a vocal leader.  A native of Canada, Felix is a solid floor general that is fundamentally sound - capable of making shots and also finishing with either hand in the paint.  A solid low to mid-major division-I prospect.

- Del Rio is a strong post player with good physical strength.  He has good overall toughness and does not mind physical contact.  A good finisher that gets to the free-throw line often.  A good athlete for his size.  A strong rebounder that gets good low-post position.  A native of Brazeil.  Will come back to the program for a post-graduate year.  A very good mid-major prospect for the 2016 class.

- Barrett is an solid four-man prospect that is also capable of playing as a 3 as well.  He is an active rebounder and runs the floor.  A solid shooter.  A good overall post player with footwork.  A good prospect for a smaller division-I program.

- Ergas is a big-time athlete with high-major division-I athleticism.  The nation's top junior college scout Jerry Mullens raves about this young man's potential.  An active player on the floor with nice length of body, which allows him to play passing lanes and also attack the rim offensively.  A good open court player and slasher with loads of potential for the future.  Receiving some high-major division-I interest currently.

- Brooks is another native of Canada.  An extremely quick point guard prospect with a very good handle.  He is a strong finisher at the basket and gets into the lane often.  Also a very good shooter of the basketball with range.  A solid division-II prospect.

- Love is a very good shooter of the basketball with range on his shot.  He has a very good skill level for such a young prospect.  A solid athlete with a good body already.  He also has good length of his body and is rangy.  Has the potential to develop into a very good prospect over the next two years.

- Robinson is as good a prospect from the 2019 class as there is in the state of Arizona.  Was selected as the top overall prospect at last year's John Lucas Camp Right Way event in Arizona.  A strong, well-put-together guard prospect with good strength on his smaller frame.  A very athletic and skilled guard prospect that can almost get his shot at will.  An excellent finisher that does not mind physical contact.  A very good ball handler and passser with good court vision.  Came to the program recently from Kansas.  Has a bright future ahead of him.