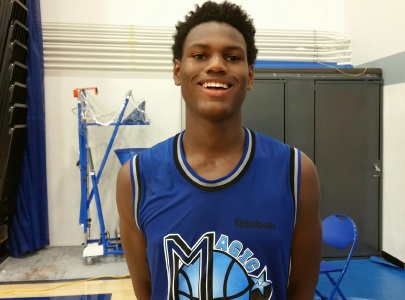 Sunrise Mountain High School's talented 6-foot-6 senior wing Elijah Thomas became one of the elite prospects in Arizona's 2016 class with a terrific performance this spring and summer.  As a result, Thomas received loads of college recruitment.  With numerous college programs to choose from, Thomas found his fit before the start to the signing period - a West Coast Conference School.

Thomas had coaches all summer intrigued by his raw talent and versatility.  This summer was a true coming-out-party for Thomas, as many college coaches and media marveled at his abilities to handle the basketball and make the right plays for his team.  His college-ready body also intrigued coaches.

Congratulations to Thomas and his family on this amazing accomplishment from our staff here at Arizona Preps.

Arizona Hoop Review Scouting Report:  Thomas is a high-major athlete that probably would be looking at a future pro career in football as a tight-end if he chose to go that route, but instead, he is a versatile wing prospect that is capable of scoring from inside and out and excels in the open floor.  What is most impressive is his ability to shoot the basketball from the perimeter and make shots with excellent range and consistency - something that I was not aware that he could perform.  When the defense figures out that Thomas can make shots from the perimeter, he blows past defenders for layups and dunks.  Has an excellent body with loads of athleticism.  Runs on his toes and has excellent energy.  A very good defender with excellent length on his athletic frame.  Disappears at times offensively, so he will need to improve his ability to stay involved in the play. If he can improve his ability to make plays at a higer rate, he would become a high-major prospect. This young man is a sure-fire big-time talent for the future.