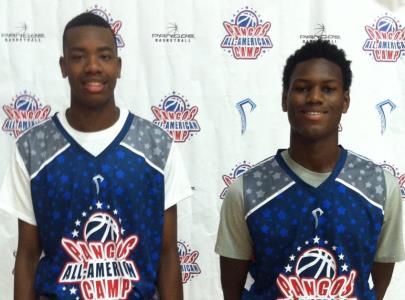 The 13th annual Pangos All-American Camp was held again this past weekend, Friday-Sunday May 29-31, 2015 @ Cal State Dominguez Hills in Carson, CA.  This national camp has served as a "coming out" party for many top past and current HS all-americans, and also has showcased many national "sleeper" prospects.

This event is an invitation-only event and only top nationally ranked players have consistently been invited in year's past.  Unfortunately for the state of Arizona, many of our top-rated prospects have not been invited annually or have not participated.  While I have spoken about this a lot in year's past, I will not address this issue anymore - it is what it is.

Instead, for this exciting camp, Dysart HS 6-foot-10 rising senior post Malik Ondigo and Sunrise Mountain HS 6-foot-5 rising senior wing prospect Elijah Thomas were the only two Arizona prospects both invited that attended this weekend's amazing camp.  Ondigo has been injured (tendinitis in knee) for a few weeks, so he did not participate in the camp this weekend.  Thomas did participate in the weekend's activities, and so he was the lone Arizona prospect that was in action this weekend for the prestigious Pangos All-American Camp.

With Elijah Thomas being the only Arizona prospect in action this weekend, he really helped himself with a solid performance.  While Thomas was not a stand-out in the camp, by any means, he did prove that the can play at the elite level with elite-level prospects and showed that he belonged on the court - adding to his reputation as a strong, mid-major division-I prospect and even possibly higher.  Thomas has really helped himself this spring, thus far, with consistent strong performances and has raised his recruiting stock as much as any prospect in the state - regardless of class.

With the frame of a receiver, Thomas knows how to use his body to his advantage on the offensive and defensive sides of the basketball.  Thomas is at his best when he uses his high-level motor in transition to spot up for the open 3, or slash to the basket and convert or draw a foul.  Thomas is a consistent 3-point shooter, but is much better when he is driving the ball to the hoop.  Thomas also has very quick feet on the defensive end, and, uses his football-like frame to keep defenders from going where they want to go.  Thomas  is a very nice athletic talent that has the attention of numerous college coaches.  He currently holds offers from Grand Canyon University and Cal State Fullerton, but I look for this yougn man to begin bringing in numerous scholarship offers for himself this summer.