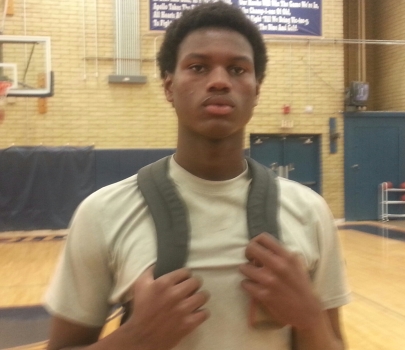 This is not the nationally recognized and top-30 nationally ranked performer Elijah Thomas from the state of Texas, but instead this talented Arizona prospect is quickly making a name of his own.  Sunrise Mountain High School's athletically gifted 6-foot-5, 200-pound junior wing prospect Elijah Thomas is a player in his own right, and he proved it recently in the Pangos Spring Spectacular in Las Vegas, Nevada.

While I had not seen much of this young budding star prospect, he more than made up for lost time, as Thomas played inspired basketball and helped lead his Arizona Magic ballclub to a final-four finish in this year's event.  Thomas was terrific in his play and raised many eyebrows from college coaches in the process.

Thomas is a high-major athlete that probably would be lookng at a future pro career in football as a tight-end if he chose to go that route, but instead, he is a versatile wing prospect that is capable of scoring from inside and out and excels in the open floor.  What most impressed me about Thomas' recent exploits, was his ability to shoot the basketball from the perimeter and make shots with exclelent range and consistency - something that I was not aware that he could perform.  As a result, Thomas has quickly emerged as one of the state's top 2016 prospects and is one prospect I will be keeping a very close eye on throughout the spring and summer evaluation periods.

Thomas is coming off an excellent junior season, where he led his high school program to a very strong 25-4 overall record this season in the Division-II Class.  Thomas' numbers were excellent - averaging 19.1 points, 7.2 rebounds and 2.6 assists per/game this season.  A stat-sheet stuffer, Thomas is primed to have a huge senior season for his high school program.  Especially after the loads of experience that he will gain against top-rated competition this club season.

When the defenses figured out that Thomas could make shots from almost anywhere on the floor in the event, he blew past defenders for layups and dunks.  This young man is a sure-fire big-time talent for the future that will have many college programs salivating this club season.  Has an excellent body with loads of athleticism.  Runs on his toes and has excellent energy.  A very good defender with excellent length on his athletic frame.  A superb sleeper prospect that will make a lot of noise over the next few months.

I will be keeping a very close eye on Thomas this club season to see just how much he continues to develop and make noise for himself with college coaches.  A definite prospect for a mid-major to mid-major plus division-I program.