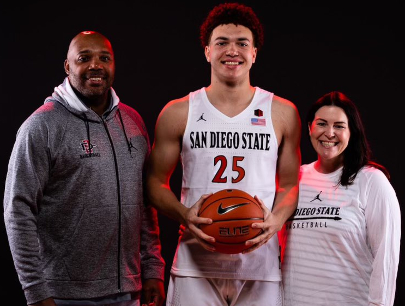 The wait is finally over for Sunnyslope High School's 6-foot-8, 220-pound senior forward Elijah Saunders. After blowing up this summer while playing through the NCAA's July Evaluation Period, Saunders went through a grueling recruiting process, as loads of Division-I schools poured in different offers for him. After narrowing down his long list of schools to (5) different programs, Saunders has made his decision before the Early Fall Signing Period - giving a verbal commitment to San Diego State University Head Coach Brian Dutcher and his men's basketball staff.

No prospect in Arizona's 2022 Class of prospects blew up more this club season than Saunders. After a very slow recruiting process for himself, Saunders absolutely blew up during the summer's NCAA Evaluation Period. After leading his Sunnyslope High School program to a 6A State Title last season, Saunders performed at a very high level in several events, and received loads of different Division-I scholarship offers for himself in the process. While Saunders went into the spring evaluation period with one offer for himself, he came out of the month of July holding on to close to (30) different Division-I offers - a dramatic improvement in his college recruitment.

Saunders is a big post player with a college-ready body, good athleticism and a soft touch from the perimeter - traits not often found in post players. He is also an excellent student and has very good work ethic and a nice demeanor. He runs the floor hard and finishes strong at the rim. He also competes hard on the defensive end of the floor and is a coach's dream on the floor. He is very coachable and has upside still to improve over time.

Saunders played this summer with the Compton Magic (CA), alongside his Sunnyslope teammate Oakland Fort, and both benefited a great deal from the exposure and constant visibility gained from playing for a high-profile club program.

Saunders will now sign a national letter of intent with San Diego State during the fall signing period, begins on November 10th through the 17th.

Congratulations to Saunders and his family from our Arizona Preps' staff, as well as the Sunnyslope basketball program on this amazing accomplishment by Saunders. Saunders is slated to help lead Sunnyslope back to a 6A State Championship again during the 2021-2022 season.