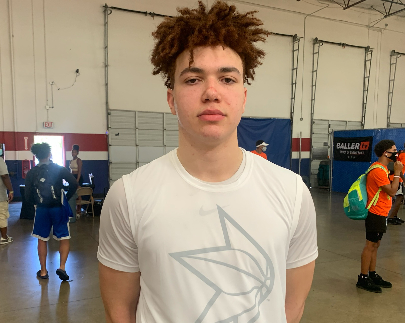 One of the elite overall prospects in Arizona's 2022 Class of prospects is absolutely blowing up after a strong spring and summer performance for himself. Sunnyslope High School's strong 6-foot-8 senior forward Elijah Saunders has done really well for himself this off-season. After leading his Sunnyslope High School program to a 6A State Title last season, Saunders has performed up to expectations in several events, and now has received (24) different Division-I scholarship offers for himself.

The last time we wrote about Saunders during the high school season, I wrote that he was a prospect seriously on the rise in his college recruitment. He was a gifted prospect that consistently played at a high level, but still possessed only one Division-I offer to his credit from South Dakota. While I knew it was just a matter of time that college coaches would eventually figure it out, and look to get involved with Saunders, his recruitment was very slow - primarily as a result of the COVID pandemic, which seriously hurt his visibility to college coaches. But college recruiting is primarily a copy-cat business, as most Division-I coaches recruit and offer the same kids - scared to make a mistake in their recruiting of student-athletes. The pressure to win in college basketball is so high that college programs do not want to make a mistake on prospects, and also want to recruit the best regarded prospects nationally that have already been discovered and highly rated.

Until the summer, Saunders was an unheralded prospect. While college coaches had seen him on film or video throughout the fall season of events, and during the COVID-stricken high school season, there is nothing like seeing prospects live and in-person. Especially a kid like Saunders, who has an excellent sized frame with a college-ready body, and a nice skillset that allows him to make shots from the perimeter with a soft touch. During the Section 7 event, both sessions, Saunders did what he needed to do - rebounded hard, finished strong and made shots with regularity from the perimeter over defenders. As a result of the large number of college coaches at the Section 7 event, Saunders was among the elite overall individual prospects and performers in the event.

Saunders has now benefited in amazing fashion, as he has gone from (1) Division-I offer at the beginning of the NCAA Summer Evaluation Period, to now possessing (24) different Division-I offers. Did he improve that much in the past two months, or did get college coaches finally see what we have been saying for a year now? He simply was seen in an environment that allowed his talents to be in full display, and he capitalized on the opportunities.

And many more offers could still be on the way for Saunders, who has absolutely blown up over the past couple months. Very few prospects received this level and amount of college recruitment, but Saunders is a big post player with a college-ready body, good athleticism and a soft touch from the perimeter - traits not often found in post players. He is also an excellent student and has very good work ethic and a nice demeanor. He runs the floor hard and finishes strong at the rim. He also competes hard on the defensive end of the floor and is a coach's dream on the floor - very coachable and has upside still to improve over time.

Saunders is also playing this summer with the Compton Magic (CA), alongside his Sunnyslope teammate Oakland Fort, and both are benefiting from the exposure and constant visibility gained from playing for a high-profile club program. Both prospects will need guidance on the right fit and not going to high, as most college prospects are often advised to do. The pending decision by Saunders, and also Fort, will be a very important one for their college futures.

I will continue to follow the college recruitment of Saunders, and look to bring you more updates as they continue to develop.