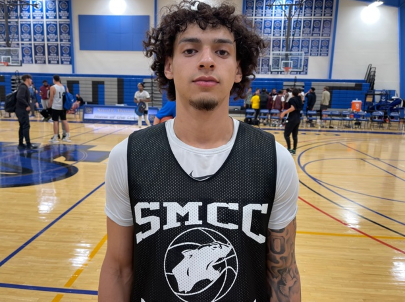 With the start of the 2021-2022 ACCAC Junior College season now upon us, I had an opportunity to watch a great game tonight between South Mountain Junior College and Park University. The exciting scrimmage resulted in a tie, but South Mountain JC 6-foot-2 sophomore guard Elijah Melendez would perform at a high level - pouring in an impressive effort in the contest and emerging as a sure-fire Division-I prospect.

In the game, and while playing until being injured in the game late (ankle), Melendez would return late to bring his team back in the contest with his ability to make plays off the dribble and score the basketball at a high level. As a result, Melendez would finish with a game-high 22 points, 5 rebounds, 2 assists and shooting 2 for 3 from 3-point distance, all while sitting a good part of the game due to the scrimmage format and also an injury. Melendez could have had much better statistics in a true contest, proving to me that he should rank among the best scorers in the ACCAC Conference this junior college season.

Melendez is a very athletic guard prospect with long arms and strong hands. He is a superb offensive talent that can score the basketball in a variety of ways with a nice offensive skillset that allows him to score off the dribble or from the perimeter. He has a nice shooting stroke with excellent range, and is a jump shooter with nice lift on his jump-shot. He has a strong ability to create off the dribble and make plays off the bounce, over and around defenders. A slick ball handler and passer as well. He is very good in the open court where he thrives and finishes very well. A slick defender that applies nice defensive pressure on opposing guards, and plays passing lanes quite well.

Melendez is a transfer from Benedictine University Mesa, but has definitely developed into a sure-fire Division-1 prospect. A very skilled guard with superb athleticism and a scorer’s mentality and ability. He should benefit nicely after a stint in the junior college ranks.