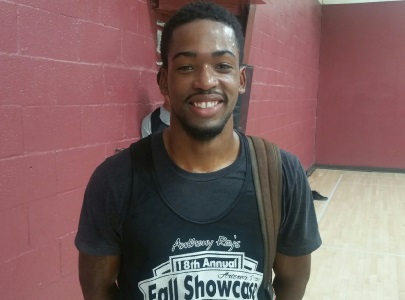 While Mead was on the verge of blowing up this spring after several recent strong performances for himself, he chose to end his college recruitment during the early signing period.

Mead is a lesser known prospect in the state's 2017 class - a player that most basketball enthusiasts in the state still have not seen since he did not play for an AIA high school program last season.  Mead led his school to a big CAA State Championship - defeating #1 ranked Tri-City Christian in the state final, 61-60.  Mead and his confident teammates last season would lead Student Choice (21-4) to their first ever CAA state title in their school's history, and also the biggest single game victory in school history.

Elijah Mead has proven that he is among the best 2017 prospects in the state, and one of the most talented guard prospects I have seen in the class.  Mead is an athletically gifted guard prospect with a nice handle of the basketball and a strong ability to get to the basket and finish.  He is also an excellent shooter of the basketball with good range on his shot.  A jump-shooter, Mead is able to catch and shoot or score of the dribble.  He also possesses a very nice mid-range game.

Mead thrives in an uptempo style of play and is very good in the open court.  Mead has the potential and ability to play at the low to mid-major division-I level after high school, and was regarded by our staff as one of the top 3 unsigned prospects in the state.

Congratulations to Elijah and his family on this amazing accomplishment for himself.   He is a fine young man and has a bright future ahead of him.