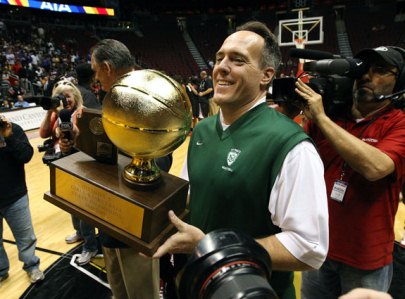 In case you missed it, the highly successful group of Ekmarks, St. Mary's High School head coach Curtis Ekmark and his top-rated daughter, 6-foot-1 senior guard/forward Courtney Ekmark (UCONN commit) will not return to the St. Mary's girls basketball program this season - beginning a new chapter in both of their lives.

Curtis Ekmark has decided that he will pursue another endeavor with Nike - developing a strong Nike-sponsored girls basketball club program in the state of Arizona.  The program will be in conjuction with the Arizona Stars and club president Art Dye, and will involve girls ages 4th through 12th grade.  Ekmark coached a boys 16 & under team this summer for the Stars - coaching his son, Andrew Ekmark, a sophomore at Phoenix Country Day HS, and many other top prospects from within the state of Arizona.

Despite valley-wide criticisms from basketball enthusiasts in the state, Ekmark developed St. Mary's into an absolute powerhouse - both locally and nationally.  As a result of his efforts, Ekmark changed girls basketball in the state - improving the quality of recruitment for girls in Arizona and bringing major national attention to the state.  Under Ekmark's leadership, St. Mary's would win as many as 49-straight games, before finally dropping a game last season to a loaded Mater Dei HS team in the Nike Tournament of Champions - the Knights only loss of the 2012-2013 season.

Ekmark's Lady Knights would advance to the state championship game 5 years in a row under Ekmark, winning 3 state titles in a row.  The most impressive season came during the 2011-2012 season when his Knights finished the season as the nation's top team, after winning the prestigious Nike Tournament of Champions, and also finishing the season undefeated with a perfect 30-0 record.

While superstar 6-foot-1 senior guard/forward Courtney Ekmark was slated to return this high school season for her career finale, she will also not be returning to St. Mary's HS, as a result of her father's career change.  She will instead be home-schooled for her senior year and will sit out playing basketball for the season.  She will rather work on her game in preparation for her college career at UCONN - the nation's top women's college basketball program.

Courtney Ekmark is currently rated as the #7 overall prospect by ESPN in America's 2014 class.  She would have returned this season leading a team of inexperienced players.  The Knighst lost 4 starters and a total of 5 division-I signees from last year's team.

Curtis Ekmark will serve on a committee that will conduct a national search for his replacement at St. Mary's .

“My goal is to get someone in place and I’m going to spend whatever time is necessary to make it a smooth transition,” Ekmark told AZ Central.  “Hopefully we can continue this unique culture at St. Mary’s.”

Ekmark transformed the culture at St. Mary's in a manner that made it almost impossible for other opposing high school teams to even consider defeating them.  It became almost ridiculous to even imagine another girls program winning the state title with the Lady Knights in the field.

Following up Curtis Ekmark at St. Mary's HS this season and in the future is almost impossible.  Basketball in the state is truely better as a result of Ekmark's contributions.