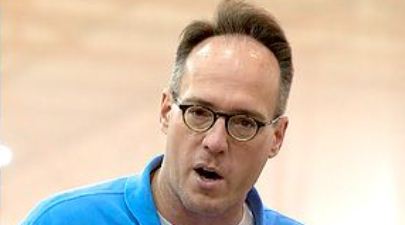 St. Mary's High School's girls head coach Curtis Ekmark has been selected as our 2013 Arizona Preps Girls Coach of the Year. Ekamrk led his Lady Knights to their third consecutive state championship this season - compiling a record of 29-1 on the season, and an amazing 87-3 record over the past 3 seasons.
Share
Facebook Twitter LinkedIn WhatsApp Pinterest Email

As if making history last season in the state of Arizona in girl's basketball wasn't already enough for St. Mary's High School's head coach Curtis Ekmark.  Well, he has done it again.

After a perfect 30-0 season last year where the Knights won a state championship in easy fashion, the Nike Tournament of Champions girls tournament during the winter and also an historic national championship (by ESPN) and #1 national ranking, it had seemed that Ekmark and his Knights could do nothing better.  But for the controversial Ekmark, there is always more to be done.

And why is Ekmark controversial?  Simply because he wins and does it his way.

Ekmark basically caught loads of criticism when a number of his players from his club program, the Arizona Warriors, decided to attend St. Mary's HS and play for him.  While Ekmark has always denied recruiting these players to the school, in today's world of talented athletes, players go where they like the coach and feel that they will have opportunities to develop and, of course, win.

Whether or not Ekmark is liked or disliked by basketball enthusiasts in the state, he has done an unparalleled job of raising the level of girl's basketball in the state of Arizona - unlike anything we have ever seen before.

Ekmark, a former basketball player himself at the University of Marquette, where he played for legendary head coach Rick Majerus, has a very unconventional style of coaching.  Looking for a stat sheet after his team's play, and you won't find one.  That's because he doesn't keep them.  Ekmark never keeps his player's statistics.  Instead, he teaches his players to play an very unselfish, selfless style of basketball that promotes ball movement in a very up-tempo, attacking brand of basketball.

After an amazing 2011-2012 high school basketball season, Ekmark took his place again as the head coach for his Nike-sponsored Arizona Warriors club program - winning numerous games this spring and summer, and bringing high-major scholarship opportunities to each of his players in the process.

While taking loads of phone calls from division-I college coaches on a daily basis, Ekmark saw each of the prospects on his club program commit to division-I programs this summer - even his daughter, Courtney Ekmark, a 6-foot-1 junior guard/forward, would commit to the nation's top women's basketball program, UCONN.  In fact, since the spring began, Ekmark has seen her national ranking improve to #8 overall in America's 2014 class by ESPN.

Not to be outdone, Coach Ekmark would then reel in division-I offers for the remainder of his girls in the program - all seniors.  After Mesa Mountain View 6-foot-2 senior forward Jordan Jensen would commit to Iowa State, and Flowing Wells HS 6-foot-2 senior post Lyndsay Leikem would commit to Ole Miss, then three more big pledges would take place as St. Mary’s star players Danielle Williams (Michigan commit), Dominique Williams (UCLA commit) and Chantel Osahor (Washington commit) would each check in.

What was most surprising for Walton, the younger sister of Cortnee Walton (University of Louisville), was that she didn't even play in 6 games last season for the Knights.  While she is a definite talent with very good athleticism and a nice skillset, it pays to play for a high-profile high school and club program, with a coach that has major contacts and relationships to division-I coaches.

Call it what you will, but if the focus is to improve as a player and get exposure to college coaches, then no one does it better than Ekmark in the state of Arizona.  Take it from someone who knows very well.  It takes countless hours of time, patience and a tremendous heart for kids to make the relationships strong enough to bring home division-I scholarships to so many - and Ekmark has done just that for girl's basketball prospects in the state of Arizona.