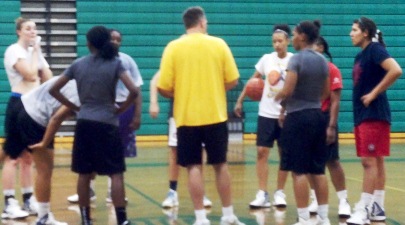 St. Mary's High School head coach Curtis Ekmark has changed the basketball landscape for girls basketball in the state of Arizona in a big way.  After posting a perfect 30-0 record during the 2011-2012 high school basketball season, winning this year's prestigious Nike Tournament of Champions, winning the Division-I state championship for a second year in a row and, ultimately, winning a national championship with the St. Mary's Knights, Ekmark has raised the bar for the level of basketball played in the state of Arizona.

If that wasn't already enough, Ekmark also coaches a club basketball program known as the Arizona Warriors - one of the most talented girl's club programs in America.  In fact, the Warriors were ranked as high as the #7 rated club program in America last summer and are a Nike-sponsored program that competes on the Nike club tournament circuit.

The Warriors have only competed in one tournament thus far this off-season - competing in a club event in California in the spring, where they finished with a 3-1 performance.  The Warrior's only loss in the tournament came at the hands of the tournament champion, Team Concept (OR).

The Warriors are now set to begin their summer tour as the team is set to venture to the state of Oregon for the End of the Trail basketball tournament.  They will then set their sights on a tournament in Chicago, Washington D.C. and then Augusta, Georgia, to finish out the summer.

The Warriors are absolutely loaded with much of the state's top talent in Arizona's 2013 and 2014 classes.  Led by the play of recent commits, St. Mary's HS 5-foot-9 rising senior twin sisters, Dominique and Danielle Williams, and also 6-foot rising junior guard/forward Courtney Ekmark, the team is very strong.

Courtney Ekmark, Curtis' daughter, recently turned in one of the state's biggest commitments in Arizona history - giving a verbal pledge to UCONN.  Now regarded as one of the elite 2014 prospects in America, Ekmark chose UCONN over a large number of scholarship offers, including offers from North Carolina, Duke, Stanford and Vanderbilt.

While it was thought that the twin duo of Dominique and Danielle Williams would elect to go to school together, Dominique chose to verbally commit to UCLA on Sunday, while twin sister Danielle elected to verbal to the University of Michigan.

Also committing this weekend for the Warriors was Flowing Wells HS 6-foot-2 rising senior post Lyndsey Leiken.  After having a strong junior season, Leiken chose to commit to a program in the SEC Conference, as she chose Ole Miss.

This team, much like the St. Mary's HS team does, plays a brand of basketball unlike many have ever seen.  They fast break hard, run the floor, look for the open man at all times on the court and share the basketball with a very unselfish style of play.  They compete hard and play to win in every game.

When watching this team practice, Coach Ekmark can be heard shouting out to his players, "no girl finishes."  This team does not allow their gender to limit their ability to play the game of basketball or accept any excuses for lack of execution.