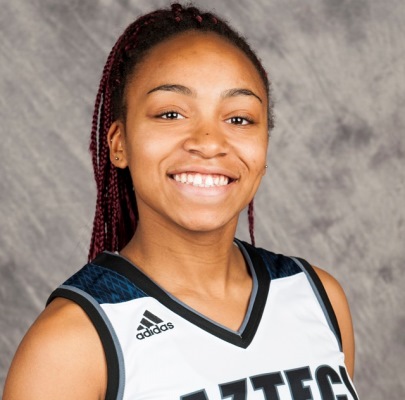 The No. 1 seeded Aztecs defeated No. 2 Mesa Community College 78-54 - snapping their three game losing streak to the Thunderbirds in the Region-I, Division-II title game.  This is Pima’s first region championship since 2011.

Up 13-10 in the first quarter, freshman Sydni Stallworth (pictured) hit back-to-back three-pointers.  The run carried into the second quarter, as the Aztecs took a double-digit lead after going on a 13-2 run in almost seven minutes to take a 26-12 advantage.  The Thunderbirds cut the lead to seven points on two occasions, but that’s as close as they’d get as Pima led 34-24 at the break.

The Aztecs dominated the glass, as they outrebounded Mesa 61-34 for the game. They also had a clear advantage on the offensive glass at 29-12.

Stallworth scored a game-high 23 points as she went 5-for-8 from three-point range. She also had 10 rebounds (six offensive boards), three steals and two assists.

The Aztecs advance to the NJCAA Division-II National Tournament in Overland Park, KS on March 15-19th.  The brackets will be released on Tuesday.