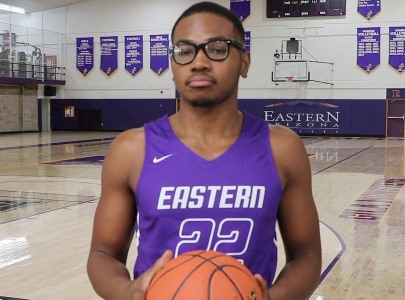 Eastern Arizona Junior College (10-1) has been off to a terrfic start this junior college season, in non-conference play and also ACCAC Conference play. While not big in size this year, this year's Eastern team is quick and skilled and, as a result, has won (3) games in a row this season and has the best overall record among ACCAC teams in the conference.

On Wednesday evening, Eastern traveled to South Mountain Junior College to face the Cougars in an ACCAC match-up. The game turned out to be not much of a contest, as South Mountain would get down to Eastern early in the game, 41-33, behind strong first half play from 6-foot-6, 225-pound sophomore forward Nathaniel Pollard. Pollard has been terrific this junior college season with his play and has been selected as the ACCAC Player of the Week (2) times this junior college season. Pollard and 6-foot-7 sophomore forward Collin Kelley would lead Eastern to a first half lead that Eastern would not relinquish, as they would go on to win the basketball game 85-64 in fine fashion.

This Eastern Arizona ball club, while not very big, is one of Head Coach Maurice Leitzke’s quickest teams, and they share the basketball and seem to enjoy playing together. They defend very well and are tough to defend, as a result of numerous players that have very good versatility on the floor.

Here is a breakdown of several of the top prospects on the Eastern Arizona roster . . .

Pollard is a strong, physical 3 / 4 prospect that is capable of playing inside and outside. He has a good shooting stroke with range on his shot out to 3-point distance, but is at his best from mid-range where he is able to make plays off the dribble toward the basket. A strong finisher around the rim, Pollard is a mis-match problem for opposing teams and difficult to defend as a result, as he can score inside and out and is physically very strong and has very good overall athleticism. A good passer. Runs the floor hard and is a good finisher in transition. An active rebounder that rebounds outside of his area. A good overall prospect that should be able to help a team immediately at the next level.

Anderson is an electric guard prospect with superb quickness and explosiveness. He has good versatility from the guard position, as he can play either guard position on the floor, and has a good overall feel for the game. A left hander. He is a strong driver of the basketball and finisher, and is able to make plays for himself and others. He attacks the basket hard and with explosiveness. A very good ball handler. Pushes the basketball. A very good defender with excellent quickness of feet and hands.

Kelley is a stretch 4-man that is able to play inside and out with a variety of offensive skillets, that allow him to be effective scoring the basketball. He has a soft touch from the perimeter out to 18 feet, and can score with his back to the basket. An active rebounder that has a long wingspan. A strong finisher around the basket. Runs the floor and is a good finisher in transition. Tweener physically, which will limit his recruitment. Productive prospect. Glue guy.

Brown is a nice looking prospect with a nice all-around skill level and an ability to make shots with excellent range from deep. He has a pure shooting stroke. Skilled performer that can slash and finish in the half-court set and in the open floor. A good ball handler. A solid shooting guard prospect. A very good defender with long arms, quick hands and feet.