Dylan Anderson’s Future As Big As It Can Get 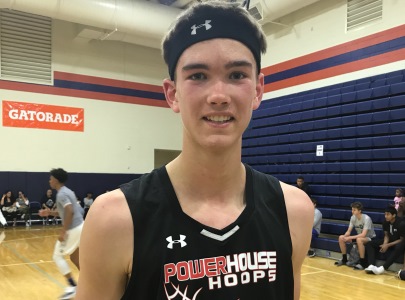 Arizona Preps traveled to Las Vegas this weekend to watch the action in Ryan Silver's Memorial Day Classic, and the action was exciting with many good prospects and teams in action over three days.  One of the elite overall prospects in the event was, of course, 6-foot-10 middle school phenom Dylan Anderson.  While we have known about Anderson for some time, this weekend was much of a coming-out-party for Anderson among numerous other top-rated scouts.

As a result of his strong play in the event, combined with his amazing potential for the future, Anderson absolutely blew up, and will only continue to rise from here.

While playing for the loaded Powerhouse Hoops 15U team, Anderson faced older competition and absolutely held his own - raising many eyebrows from those in attendance.  Anderson is definitely the next big thing in the state, and also will be the next big thing in the West - a definite future Top 20 national prospect.  Still a mere 2022 college prospect, Anderson is already an amazing 6-foot-10 in height and has very good athleticism, versatility and mobility on the floor.  He is very fluid in his approach to the game, and is very advanced in his approach.  It will be very interesting to see just how much he continues to grow in height, since he is so tall early, but, whether he ever grows even another inch, Anderson is already excellent size and length and has a high-major skill level already.

Anderson commanded the attention of Josh Gershon and Eric Bossi from Scout Hoops during the event, and if there remarks about him were indicative, then Anderson should make a big introduction into their future national rankings for the class.  I can't imagine another prospect out there with more promise at this age.

Anderson already possesses offers from Arizona State, Cal, Grand Canyon and Northern Arizona, and he hasn't even entered the high school ranks as of yet.  He will eventually land offers from everyone - it is just a matter of time.

Anderson is already drawing comparisons to NBA superstar forward Kristaps Porzingis by some, and Christian Laettner by others.  This young man could become so good, that he makes a strong name for himself.

Anderson has decided to attend Perry High School in Gilbert, Arizona next fall.